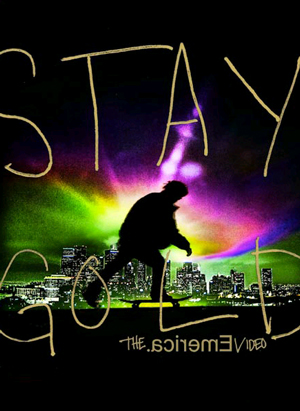 Videos from companies as big as Emerica are always going to fall victim to insistent message board hype-bringers. Some people, inevitably were going to be dissappointed because no video can realistically deliver premeditated perfection, but we’re in safe hands for satisfaction here.  How can anything following in the footsteps of the boldly – and accurately – titled ‘This Is Skateboarding‘ deliver anything less than pure innate gratification to anyone who loves to watch skateboarding that they’re quietly aware and content that they will never be able to do themselves. Emerica have always done things naturally, and ‘Stay Gold‘ is no exception. From the off, it’s a city slicking, swampy bluesy rock jaunt through leather jackets and impossibly huge gaps. This is, very much, still skateboarding, the Emerica way.

Upon opening the DVD case there is a little touch that serves as part of the farewell to one of the most significant and enigmatic characters in skateboarding, Heath Kirchart. You’ve all seen that picture with him facing away from the camera by now, but to pull up a gold disc and find him smirking at you behind it is strangely heart-warming. Very nice touch, Emerica. His retrospective / new all-white section that opened the premiere is hidden as an easy-to-find easter egg, and it’s a golden reminder of how god damn progressive the people wearing these shoes have been throughout the years. No one can skate gaps and rails as naturally as Heath, and after a totally unexpected mega-ramp session in all-white do not expect to be returning to the comfort of your sofa for the rest of this video as from now on it’s legit face-as-close-to-the-screen-as-possible time. Stay gold, Heath Kirchart…

Brandon Westgate is first to the plate after some sleazy LA time-lapse (not the bad kind) driving segments and continues where he left off in the Zoo York video, which was absolutely blowing yo’ heads up son. I suspect even Andrew Brophy is a little jealous of Westgate’s pop. He chomps his way through SF with a style that recalls the aggressiveness of Grant Taylor, the control of Busenitz and the high-caffeine content of Donny Barley. Skater of the year anyone? A candidate for sure.

Bryan Herman pisses around in schoolyards for half of his part but don’t get all haters-gonna-hate just yet and say ‘woah, woah, where’s my bloody PROGRESS and INNOVATION I ordered’ because he’s given you more than enough of that already. In two parts Bryan not only trips out to some boiling hot Tom Waits (an instant winner) but has fun and summons up the spirit of schoolyard table popping that there can never be enough of. Marquis Preston follows with some outrageous trick selections into handrails that wouldn’t make me feel any more at ease walking up the stairs that he slides down. Spanky uses his full name for a mature, rocking section. Mr. Kevin Long knows Captain Beefheart… and shit is positively electric.

Collin Provost attacks transition and does a very surprising manouevre up a handrail that Leo later eats total shit on. Jamie Tancowny also tucks into a hefty platter of shit but has some tricks that are slick like rick so don’t miss. But though the new blood are doing their thing, Aaron Suski holds his own amongst the noobs. He can kill it as hard as ever with combos that are genuinely creative and balls to the wall natural style. Love it. 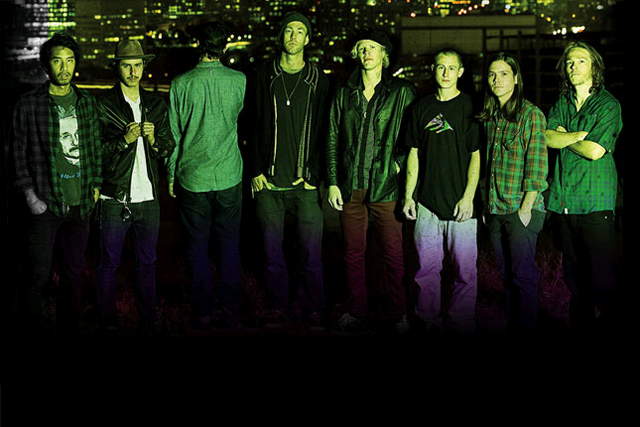 Braydon Szafranski looks and skates like a mess, but this is far, far from a negative comment. Expect a lot of quirky flips out of more or less everything he does, the game is being raised. So enter Figgy who swept under my radar to raise a game I had no idea he was even playing. I’m claiming he’s hacked his way in because there’s some unimaginable stuff in here. Perfect balance cheat on? I think so. This is the raddest part to come from the not so universally bummed hitters.

By now you’re probably impressed, a little surprised and already satisfied. WELL, if Stay Gold was a rollercoaster then you haven’t even hit the thrilling loop de loop which made you get in line in the first place. Jerry, Leo and Drew are worth the pricetag alone. You want proper, proper progression? Here you go…

Jerry Hsu’s part is (after the gnarliest bail montage ever) entirely switch or nollie, and it’s all stuff you wouldn’t even dream of doing regular. Leo Romero continues further down the unnatural path and does indeed skate up more handrails than anyone ever has done before. His last trick brings a whole new meaning to the phrase ‘WOAH WOAH WOAH, REWIND NOW’. Even if now we’re struggling to find the exact point on our iTunes player the correct term will always be ‘rewind that shit’, and this shit will be rewinded. A lot.

Andrew Reynolds is The Boss. That’s all you need to know. Go out and buy this, don’t bother skating stairs any more because all that can be done is surely achieved in Stay Gold. Surely. Well, at least until the next Emerica video.

You should also be aware that the DVD extras alone are worth the price tag (which is pretty wallet-friendly as it is). Mike Manzoori goes behind the scenes of Andrew Reynolds unparalleled perfectionist side and I cannot describe how baffled it will make you. The man is simply an unstoppable skateboarding machine, with a gloriously human personality. It’s fascinating, as are talks with the legendary Ed Templeton and footage from the Euro rippers. You should already be aware that the DVD version has the Heath Kirchart easter egg, but it also features one of the raddest Barrier Kult montages yet found by going left off the Bonus Features menu. Deer Man of Dark Woods raises the barrier bar even higher and his last three tricks will make you convert to the way of the jersey barrier doctrine. Nobless Oblige, may you continue to be a barrier shredder, Deer Man.

Stay Gold is an eye-opening watch on your first viewing, and only gets more impressive with every re-watch. Go and get it.

If you need any further convincing, watch the video coverage of the premiere below to see what both everyone had to say about the film.