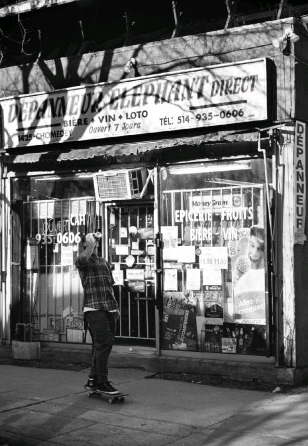 Elephant Direct is a visual project by two of skateboarding’s most traditional filmmakers, Jeremy Elkin and Jason Auger. Following in the spirit of Elkin’s Lo-Def, here the work is compounded into a temporary online stream that serves as a tribute to the working class. In today’s post-‘throwaway’ era, senses and memories are all too regularly put under a general anesthetic at the hands of both oversaturation and too many nameless kids doing 360 shove-its better than you could. And consequently, the relationship we form with skate videos rarely extend beyond a one-night stand of gross hyperbole and pressing a fucking ‘like’ button. Enter Elkin and Auger, determined to maintain that sense of mystery and memorable hand-made personality that made the likes of Video Days what it is: something that can never be described as ‘throwaway’.

The full, high quality video can currently be watched on (and only on) Color Magazine’s website, but for a very limited time only; Elkin and Auger’s own pragmatic poke at the limited attention spans the internet generation have. Named after a world-weary convenience store that has seen its fair share of drug deals and house arrests, Elephant features Kevin Lowry, Bradley Sheppard, Andrew McGraw, Marc Tison, Torey Goodall, Justin Gastelum, Seb Labbe, Russ Milligan, Pat O’Rourke and Mike Fyfe as seen through the idiosyncratic filming/editing double edged sword swung by two people who actually give a damn. As it’s such a special film that deserves to penetrate through the temporary times we awkwardly live in, we have decided upon watching the stream to give it a full-blown review. Be sure to keep your eyes on Color for how to get your hands on a legit copy when its limited life span online is inevitably replaced by crappy youtube pirates tugging their e-peen.

After a series of short but soul-warming animations and film clips we are introduced to Andrew McGraw. Here is a man with a seemingly endless bag of tricks that is emptied across a wide variation of Canada’s answer to terrain that will be sufficient evidence in an extensive essay on what spots have defined the term ‘east coast’ skateboarding over the past two decades. I’m talking ‘real’ street son; expect the unexpected.

Mike Fyfe is up next and takes the refreshingly stubborn ‘I refuse to skate anything other than the sketchy local spot’ approach to an entire new level (please see: the frontside boardslide to thin wall tightrope walk to evade a bunch of kids playing ball in the street rollaway just a few tricks in). One of those kids high fives him and so should you. The stuff he is skating is difficult even by UK standards, and I’d love to provide you with examples but I’m struggling to draw my attention away from the most OTT stedge I’ve ever seen. It’s exactly 4:20 in and that probably means something. The filmer must have been high as a kite to take equipment there. Props on a stellar front nose too.

What follows is a shared section featuring Russ Milligan, Pat O’ Rourke and Seb Labbe, the kind of line-up that implies bad implications, the idea that there wasn’t going to be that much footage from all of those names isn’t a pleasant idea. But having enjoyed this film so much until this point I didn’t let that doubt enter my mind and I was right not to; this section killed it. Russ’ continues to dabble in a trick selection that makes your feet feel weird just watching it, and I like that. Pat O’ Rourke meticulously flows through sick lines and Seb keeps it real tasteful on spots that continue to look awesome on camera but must suck to skate. By this I mean I’d love to skate everything I’m seeing in this video. 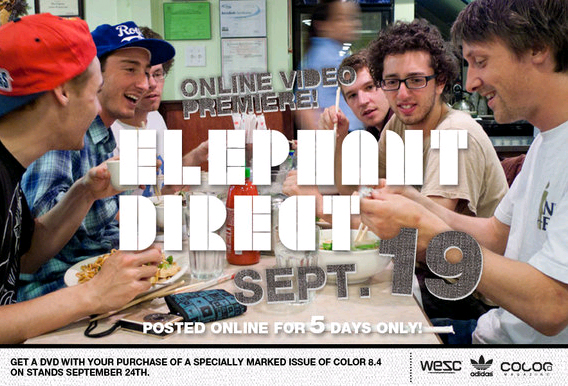 It wasn’t until the friends montage that I noticed something which may explain my increasing love for this video: everything looks like it was filmed in Autumn or Winter. Regardless of whether this aesthetic may be inherant amongst independent Canadian or East Coast videos, I really, really dig it. The montage is a great one too; there’s appearances from the likes of Brian Delatorre, Jimmy Macdonald (who lands a front biggie so rugged and raw that I screwfaced at the sight of it), Jeff Edwards and Luke Koch.

Bradley Sheppard and Torey Goodall are next in a car-grinding section that sent me into a brief state of bewilderment that I’m only half way into this relatively short video and I’ve already seen so much untainted awesome. There’s simply nothing not to like here, and furthermore, it’s remained true to its testament: this is for the workers, those who revel in doing stuff by hand and getting a little dirty. It makes me want to get grubby and skate the spots I skated growing up again and I haven’t felt that in some time. Rumour has it that this will be Torey’s retirement part (the rumour comes from the mouth of Torey himself, but we all know how skateboarders love to say stuff like that), and I sincerely hope that isn’t too true. This section was unexpected enough given the five years since his last full part, and it was a visual treat; Torey makes you want to skate.

Marc Tison’s opening two lines on that unforgettable concrete full-pipe/mini ramp, the Montreal ‘O’, is enough to make this a stand-out section, so to speak. Not to say the other sections don’t stand out, but the sheer amount of control this man has over his skateboard is mind-bending. Pools are torn apart what follows on the ‘O’ by both Tison and Justin Gastelum is just too much. Bricks will be shat.

All that has been discussed culminates with Kevin Lowry who has proven enough times that he should be the first name to come up in your history if you type so much as ‘k’ into your Google Chrome searchbar. Any footage from this gent is outstanding and deserves your full attention. Fakie cab over a big block to switch manual (or fakie nosemanual if we’re playing that pedantic shit) down a bank? 50-50 over what looks to be the roof of a shop door? This is urban fantasy at work.

Your skateboarding life will be made better by having this video in your collection. It’s that simple. Jeremy Elkin and Jason Auger have outdone themselves in this worthy testament against the over-abundance of throwaway footage and video embeds on message boards. Stream it while you can, then go and get it.