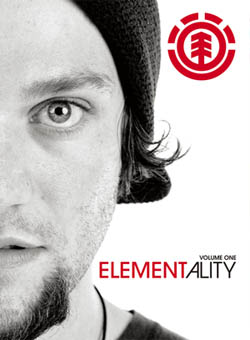 I just realized that looking at the title of Element’s new video, “Elementality”, it basically describes the thread to this production: the mentality of Element Skateboards which is respect and good vibes. Ah! Isn’t that sweet? Anyway, here’s the low-down so enjoy! The video starts off with an open letter to explain Element’s roots and ethics and then we get to some skating. Jake Rupp and Tosh Townend share a part and roll along to the rhythm of Jah. Lots of quirky spots and smooth bendy legs that work together to pop out of things, and create a good introduction part. What follows is a very short part from the unique Mike Vallely. Mike busts one big ollie over a rail but then proceeds to pillage his stock of fast-plants, foot-plants and other pre-1988 tricks. I think Mike has chosen the path of old school, but that doesn’t mean I’ll like him… Next we are jetted off to foreign lands (I think the Southern Americas mostly…) where the Element team release their inner-selves onto expensive film and ride the concrete wave. Whilst watching this segment (and there are others dotted throughout the video), I couldn’t help but think how the Element team approached these off-road transitions like the Osmonds, where as Anti-Hero are more like the Osbournes. Understand? Oh! I mustn’t forget that Chris Senn recently joined the team, so due to lack of time, bits and bobs of footage are scattered throughout.

Back to the program; I can’t honestly remember which order these riders came in, but here’s the run down for the rest of them. Brent Atchley. Brent Atchley. So good I said it twice! Well, for me, Brent gets best part hands down. He skates to Public Enemy, puts out the longest part single handedly and pours his style all over the concrete park of Oregon. A friend thought Brent was a bit style conscious i.e. making sure he adds that extra bit of flair to his skating, but I disagree. Brent is sick.

Vanessa Torres holds things together nicely and actually pulls of a good part. The only thing I thought was a bit horrible was the pair of spray on jeans she insisted on wearing through most of her section.

Nyah Houston kills it for his size and age, but I hate watching little kids skate, so I definitely won’t be watching his part again. There’s a little intro to his part with some reggae which is nice but a little bit of a characature, but then it cuts to your mass produced, rock soundtracked hammer fest. (C.f.’Why… don’t you come out and say it?’)

Colt Cannon also suffers from a strangely bland part. Sure he has a few proverbial bangers in there, but I came away from Colt’s segment feeling dull…

There’s a long montage of flow riders, Twigs (Element’s junior squad) and foreign riders (No European riders though because they’re working on their own video!) that runs like an elaborate 411 Chaos section. I did spot one kid in there, though, who does shine through, but you’ll have to spot him for yourself because I’ve forgotten his name. Sorry.

Jeremy Wray stays true to form with some roof skating, 270 lipslides, frontside flips and nose manuals. Some might not like Jeremy’s part but I’ll have you know that everything you ever see of the dude is clean and big. No hand-drags, no flair, no bullshit.

Finally, we get to Bam Margera. Bam really needs to quit filming for his silly buddy-cam shows and get back to doing some proper skating before the entire skate community negates him. For the two or three clever tricks he pulls out of his hat, there is a lorry load of MTV out-take rubbish. I guess the kids will be stoked…

That’s it. I leave you with news that Bucky Lasek has just joined the team and something tells me he will feel right at home.