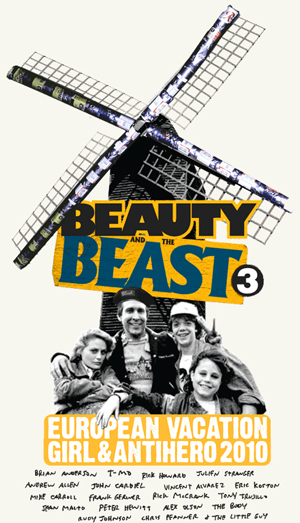 The third instalment from the mass-touring, beer-swigging, tent-pitching, concrete shredding marriage of hesh and fresh sees Girl and Anti-Hero for the first time opting to release the finished product online, for free. This will be a little gutting to some who look forward to these releases every year and enjoy flicking through whatever booklet of wonderful pap the oxymoronic duo choose to sling inside the case. Whether this was a result of the European Vacation being a little shorter than the previous two jaunts or not, you have no reason this time not to sit down and take twenty minutes out of your day to watch two of the raddest board companies do what they do better than most, skate and have a bloody baller time. Yes, that was a UK/US lexical combo move that was as awkward-looking as a 90s curb dancing session, but this is a transatlantic trip and we should honour it in such a way, or something.

As always, we begin with the Beauty edit which doesn’t hesitate to drop heavy riffs and throw hammers all over the continent. Sean Malto gets stuck into a traditional backside noseblunt shape and carries on in an unsurprisingly perfect fashion. Tony Trujillo comes steaming out of nowhere is the first to step things up and delivers another highlight performance like the demo destroying machine he is; no boneless banquet can touch the exquisitely executed one TNT nails not even two minutes in. The other Tony (Miorana) wears socks and shots like a boss and skates like one too while Mike Carroll continues to provide evidence for my perpetually unpublished (and unwritten) essay on why the world would be a better place if people skate more like him and Vincent Alvarez gets a spotlight early on that should silence any kids bickering about his pro status. I’m sure that the editors did not consciously see this video as a means to shut up any armchair critics, but it’s just further proof that this guy not only rips but is someone who you should fully support by scraping layers of paint off his face whenever you go skating.

Seeing the crew hit up Alv’s infamous TBS was spectacular. The kind of uncouth transitions that make up that particular leg of the tour it would seem were unintentionally created just so Vincent Alvarez can skate them. Control goes beyond comprehension here. Before the end of Aaron Meza’s edit I found myself thinking that the in-joke phrase ‘I’d rather watch Gino push’ should be changed to ‘I’d rather watch Girl and Anti-Hero skate boozed out of their minds on Tuborg’. Really, this shit never gets old.

The Beast edit clocks in at another furious ten minutes that begins like a bad dad’s home movie at a summer camp turned massively inappropriate. It essentially carries on from where the Tuborg guzzling left off so let’s go straight down the hatch! Besides the skating, what’s amazing here is the combination of the pissed filming and the slightly more beastly skating gives you a vicarious sense of intoxication in what is probably the only feel-good edit of the summer that could potentially give you a hangover. It’s one that I guarantee you’ll enjoy however and Rick Howard’s speak no Americano edit will perk you right up again. The Girl and Anti-Hero marriage has provided us kids with a hell of a tortured upbringing but what a ride it’s been. Uncountable wrongs apparently make one huge right so go out, go travelling, go big and have a great time.

But always watch this trilogy of awesome first.

You can download the entire thing for free from the official website. The server has understandably been suffering from some overwhelming traffic issues but keep trying. It’s worth it.