British skater Jason Caines has been positively chipping away at his new network project that brings skateboarders together to share their art, passions and general skills from around the world. Ahead of Beyond Skateboarding exhibition this month, Tim Hines asks the questions whilst Caines delivers the goods on behalf of the crew.

Hey Jason, let’s start with a breakdown of what The No Comply Network is?

The No Comply Network is an online showcase of artists, musicians and filmmakers from the skate community. No Comply promotes its members’ creative work and also their thoughts on skateboarding and making stuff. It’s a new thing and kinda different. No Comply is not a skate artist agency. Every No Comply artist is independent, the network is a window into their world and we sometimes collaborate with those artists as part of our events, online posts and products. The platform keeps members updated about what others are up to. I hope it will encourage them to skate, network and collaborate with each other in an organic and natural way.

London’s a great hub for what you’re doing, are you ever surprised at the array of local talent?

London is a hectic place to live and I agree it is home to some of the most talented skaters and artists in the world. It doesn’t surprise me that this is where some of the most exciting skate community artists would want to be here right now. I’m from Birmingham myself and moved to New Cross, in South East London in 2008 to study at Goldsmiths, and I’ve lived here ever since.

I started No Comply in the summer of 2014 after about a year and a half of working for Long Live Southbank campaign as a writer and spokesman. I met hundreds of other skaters through my work with LLSB and saw that so many of them had so many sick creative skills off their boards as well. I realised that skateboarding has a creative, talented community unlike any other out there and that something had to be done about it so I started to curate No Comply. I add new members, post interviews with them alongside images of the work and links to their websites, blogs or instagram if they have one.

As human beings, we all really want to do things our own way all the time and hate to be told what to do but as skaters we take this to the next level for sure. That’s why the name of the group is called The No Comply Network. It’s a tight knit crew who all share a passion for skating but in the end it’s all about doing your own thing.

You’ve skated Southbank for numerous years so I suppose you’ve always seen a positive relationship between artist and skateboarders?

I’ve skated Southbank for over ten years. It’s the best. SB is a great skate spot and central meeting point. However, the tight connection between graffiti writers and skaters at Southbank is a common misconception and is coincidentally not as tight knit as many may think. Let’s clear this up. Although many skaters make graff, most do not and actually at SB many of the locals, preferred the aesthetic of the spot without graffiti I mean just because you like illustration or photography doesn’t immediately mean you like graffiti but that’s the blanket solution that the Southbank Centre came up with back in 2004 and that’s how it worked out. I mean I think it’s pretty sick, but yeah, it’s not for everyone.

Nowadays, because of the internet, most artists out there are making kinda wild attention grabbing stuff and trying to go viral and many of them could walk up to a canvas and paint some challenging, unique, work. But then again most skaters would just instinctively walk up to that same canvas, snap it in two and do a switch tre flip over it, turn it into a wallie or something and then draw a sick design on it afterwards. Artists from skate culture are definitely special and pride themselves on their unique approach to creating their work. This is is a trait many of them have learnt from years of skating, which is a dynamic activity which keeps you sharp and creatively focused and which definitely results in some interesting artwork.

Skateboarding is art and most artists recognise that and that’s why the two communities are so strongly connected. The relationship between the skate world and the art world is usually positive, however the art world, fashion and other creative industries needs skateboarding more then the other way round. Let’s be honest, it’s been this way for a long time, skaters have been behind some of the biggest creative artwork and brands for a very long time. 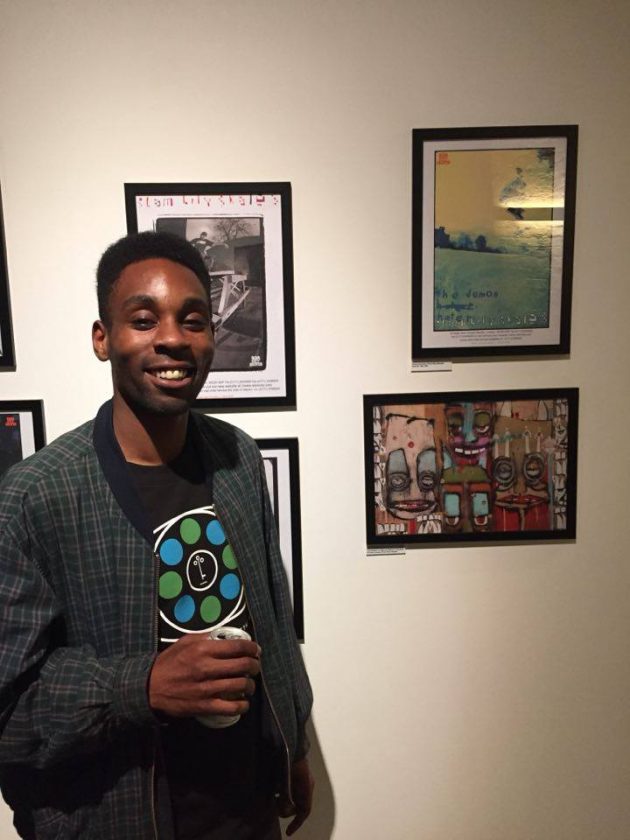 I’ve seen that you have 100+ members who are based around the globe what’s one of the ways you usually reach out to local and global talents?

I started by adding my mates like Trav Wardle and Jeremy Jones. It grew from there and I hit people up, or they hit me up, and we do a feature post, which I post on to Facebook. It’s really short interview with the chosen artist accompanied by a graphic of the work or a profile photo. It’s slowly grown and we now have members all over the UK, Europe, Canada, America and Asia.

No Comply Members are so diverse. Rogie’s a pro for Heroin but then again he’s also flown off to Africa to film Rhinos for the BBC. Sophia Bennett was a SB local and a photographer who now lives in Geneva and works at CERN, the biggest particle reactor in the world. Arran Gregory made nearly a 100 life-sized silver leopards out of mirrored glass and placed them in an East London car park. It’s just insane, that’s why I curate the page, add new members and promote their work, it’s exciting to see how much talent there is in a community you actively take a part in too. 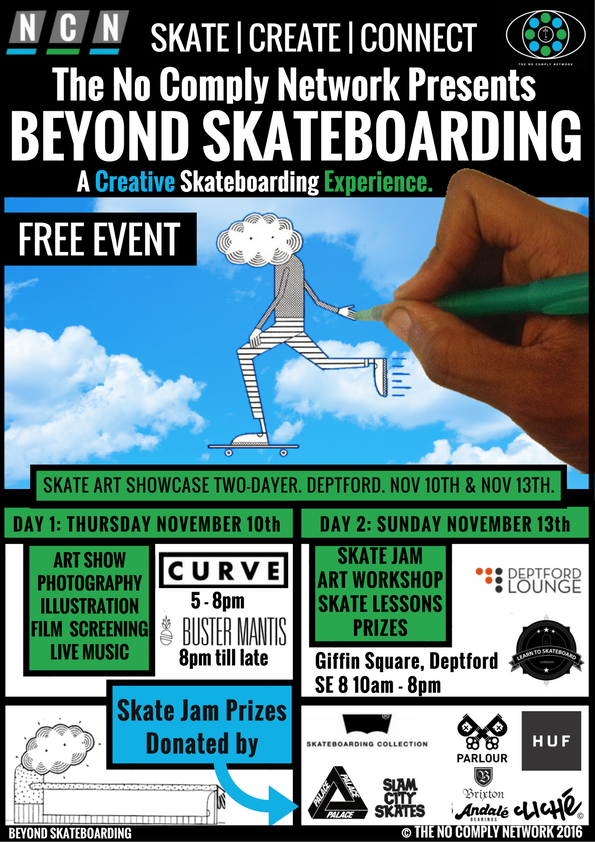 So you’ve got an event called Beyond Skateboarding coming up soon, can you tell us more about it?

Beyond Skateboarding is a skate art showcase two-dayer in Deptford London from November 10th-13th. Work will be presented by The No Comply Network and we will exhibit and promote creative work. Essentially it’s a chance for everyone to properly exhibit their work, meet up, chat and go skate.

Thursday the 10th is an exhibition and film screenings at Curve Skateshop in Deptford. We will have an art show in the shop with over 20 members showing and whilst there will premiere some new unreleased and exclusive edits by No Comply Members along with free booze. This is followed by a second exhibition, featuring more member’s work and live music in a local late night bar called Buster Mantis.

Sunday the 13th is the skate day. We’ve rented out Giffin Square a popular local ledge spot for the day. We’re gonna play more music build ramps, wallrides, flatbars and have a skate jam. It will be jokes. Alongside all this this we will be teaching skate lessons and also doing art workshops all day. Skating is about having fun so we having a series of secret challenges and activities we will release. Prizes have been donated by Palace, HUF, Levi’s, Slam, Parlour, Cliché, Brixton and Andale Bearings and we’ll be giving them away to people who want to come down and have fun. We don’t care if your good on the wood, if you like art, you fit the part.

Do you feel that there is still a place for exhibitions, instagram and other social media outlets are becoming so popular do you feel the physical still has relevance in today’s age?

Good question man. I think there will always be a place for something you can touch. Skateboarding hurts. You can’t replicate it. Yet.

Do you have any dreams or aspirations for where you want to take The No Comply Network grow to?

I hope we make this event a serious banger as it’s our first one, so at the moment, I’m hoping it goes down well. In future I want to work on more collaborative products with our members, add new members and make more rad shit.

Sounds like a good place to leave it Jason, best of luck with the upcoming events!

Find the No Comply Network online on Facebook and Insta.

If you would like to write for Crossfire, get in touch.