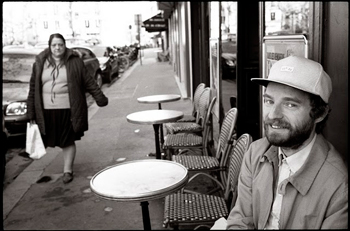 Benjamin Deberdt has done a great deal within the realms of skateboarding both in Europe and America in the last 15 years: founder of Sugar magazine, founder of Kingpin magazine, and now founder of Pause, the new French word on the street complete with English online editions. Here is the skinny from the man himself.

Portrait Right: Benjamin outside his favourite café in Paris, shot by Éric Antoine.

So tell us about Pause then…

Ehhrrr, it’s a magazine? About what makes skateboarding something worth sacrificing a lot for?

The idea is to speak about the characters, the builders, the behind-the-scene guys, the unsung heroes alongside the rich and famous. If you have a story that is worth telling, we’ll try to find you!

Can France support another magazine?

This seems to be the main question I get these days! And I have no answer to it, to be frank. But, maybe that is not the point of Pause… 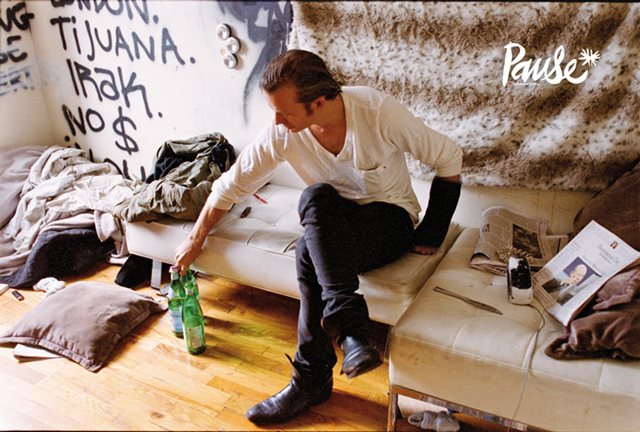 Your naturalistic style of photography wins plaudits and criticism in equal measure- can you tell us a bit about why you shoot in the style you do and what you think its merits and shortcomings are?

For people to either hate or give mad props, they should know I even exist! I doubt there are that many people that are aware of me… but I can appreciate the “naturalistic” comment. When we started Sugar with my cousin Seb Caldas, back in the days, I was still learning what the hell I was doing, and also experimenting quite a bit to get different kinds of results and not have the magazine filled with only one type of photography. Which I sometimes regret… but, yep, I’d say I have always been interested in showing what I would see, in the most natural way. This is probably coming from Tobin Yelland’s work, back then. He was shooting the whole San Francisco scene during the EMB days, but in a super gritty way. Everything was super crafted and perfectly printed, but what you saw as a reader was the real deal. Glimpses of those people’s everyday life… the glamour was there, but it wasn’t posed. It was real. And this is what I really go for, more and more: just showing the people for who they are and what they do. Which probably clashes sometimes with the manufactured image skateboarding is aiming for, these days. I understand the need for commercial images, and I certainly don’t judge it, but this is not what I find interesting doing, so I’m going my own way. And there are a whole lot of people out there still documenting skateboarding for what it is. Man, we are part of this world that doesn’t need fantasy; it is already fascinating for what it is. Look at all the characters out there, who needs sunsets in the background!?

Another major influence for me has been, obviously, Thomas Campbell, to this day. His photographic style could be described as more thought through, to make the most visually striking image possible, but in a very organic way. As in to use whatever is lying around to enhance reality and make it a bit more magical, which clashed a lot with my French way of looking at life, then. Thomas taught me everything, really: “Benjamin, you’re going to go to New-York, buy a FM2 and a fish-eye, and then, you’ll be professional…” Haha!

So, yeah, apart from countless other influences, I could say that these two had a great impact on me, then, and still do to this day. Oh, and Ari Marcopoulos, for the genuine feeling of his photos, whatever times and scenes he documented. Another great inspiration, there.

What is your single all-time favourite photo that you’ve shot?

A skate photo might be the Lucas Puig water gap kickflip… Or Javier Mendizabal nosegrinding up a ledge in Casablanca, for all the stories that are told in that one image. I don’t know, really. I don’t think much about my own photos…

As for a “non-skate” photo, I have even less of an answer! I have been pretending that I’m consolidating my archives (I believe this is how you’re supposed to explain you’re opening plastic bags to discover they are full of sequences printed in 1998!), lately, and I have found some images which, then, did not mean much to me, as in: “Oh, I can’t use that in next issue of the mag…” but have grown very fond to me, as they now tell a lot about a time long gone. This tells me how much a photo ages a bit like wine. Some turn to vinegar really quick, and should be consumed right away. Others bloom with time.

When I was digging through for Résumé, the Cliché book, I found some gems, that’s for sure! Sometimes I wake up in the middle of the night, thinking “Did I throw away those pictures of Ricky Oyola rolling a blunt at his house in Philly in 1996!!!???? Because they were a bit blurry!!!!!!????”, haha! Actually, I want to start to work on some book projects, I think. The time has come. 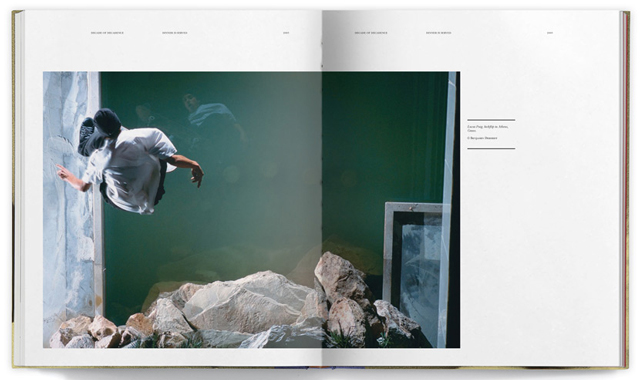 The Lucas Puig water gap photo from Greece put you onto a lot of people’s radars outside of France, can you tell us a bit about the context of that shot?

I’ll be frank, it’s all Fred Mortagne’s fault! I would have probably shot a boring picture, but he was already knee-deep in the water, all up in what I thought would be my frame. It was the end of a long day, and the spot looked great, so I was probably cursing him under my breath, when I looked up and realized there were two more stories to that unfinished abandoned mall. I ran up, made sure there was an angle, ran back to put up flashes, screaming for everybody to wait for me, ran back up and shot probably a couple frames of Lucas’s flip and a couple more of Cale Nuske’s backside flip. This being before digital, so it’s only a week later, back in London, that I realized that the reflection showed everything you couldn’t get directly, like the board, Lucas’s face, etc. I also realized that my fish-eye was damaged and that all the pics shot with that lens on the trip were out of focus! But, yep, Lucas’s photo was a total accident. Thanks Fred, let’s get on the road again, sometime soon!

The Kenny Reed Kingpin cover was described by Steve Caballero as one of the best he’d seen in 25 years of skating; what were the circumstances surrounding it?

Really? That’s very kind of Steve! Where do I start with that one? Let’s say this was the end of another long day spent on the border of the Black Sea, for what must have been the first skateboard trip to Bulgaria, from what I believe, unless Rodney Mullen did a Swatch demo there in the 80’s! So, yep, we had a great crew from all over the world, including Kenny. You and him came back from behind some bushes to tell me about some possible spot back there. We went and Kenny told me about the trick he wanted to try. I looked around and told him that by the time I’d be set up it’d be getting dark, he said “let’s do it!”, so I started rushing around… sure enough, he did land it in almost total darkness after being fully blinded by my flashes. Jedi mind trick on that one, and another great surprise at the lab a week later!

You remain the only person to have shot a legit Belfast article for a magazine- what are your memories or impressions of the city and the skaters?

It was a very interesting trip, for sure. We were in town for a few days only, and it was quite filled with action, to say the least. Us getting attacked by about fifty children on glue was a highlight, in a way. I was so convinced that this type of behaviour is not rationally possible, that it just did not register for me. I was just standing there as people were running all over the place… Then, I saw you open the door of a van and scream for me to jump in and I did. Full A-Team style!

In many ways, these four days were very surreal for me. As a French man, religion is not part of my way of thinking, and being confronted with a place where it was all other the place was strange. Just like we were in Jerusalem… But to get back to Belfast, what really stood for me was the kindness of all the people I met, skaters or not. It did have a small town feeling, in many ways, where everybody knows each other, which did not compute with my memories of growing up and seeing Belfast on fire during the news on TV. This was very interesting for me: how can you even have a war going on in such a small town? I understand the roots of it all were centuries old and very deep, of course.

Now, what I want to see is some young Belfast photographer to step up and shoot a sick report on his scene. Let’s see it! Oh, and I want Conhuir to make a comeback! Come on, son!

Pause will have an online dimension in English, what is the deal there?

We just posted issue 01 almost entirely translated on our site. The idea is to give people outside of France the option to also read about the people we think are interesting in skateboarding right now. That, and since nobody really reads English in my slightly autistic country, it can’t really hurt our sales, ha!

What advice would you give to an aspiring photographer?

There was a great portfolio of Ari Marcopoulos in Transworld, in 1998, I believe, mixing pictures of Jean-Michel Basquiat, Julien Stranger or Ryan Hickey with some advice he was giving to young photographers. I’ve had that one taped on a wall everywhere I’ve lived. Try to find it! Because, what the hell do I know, really? 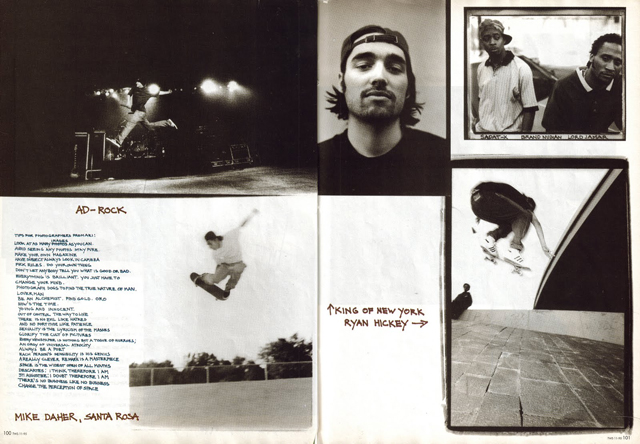