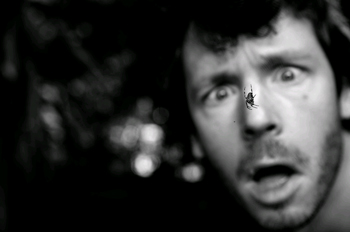 For the third and final year, the Antiz and Eastpak teams took their buddies on the road for an even tighter shoestring-belt budget than the last two. Taking over Brussels for several days of skating in between rain showers and having a great time it can only mean one thing – the hobos were at it again.

At the end of last month it was announced that Dallas Rockvam is officially on the consistently rad crew known to the world as Antiz. Considering he only met the team for the first time on this tour he obviously proved himself worthy of hanging with the fun-loving hobos full-time. We caught up with Brussels own Julian Dykmans for the skinny on the trip, meeting Dallas and a shady encounter with two russians.

To start off with, let’s have the roll call… who was brave enough to hobo it up in Belgium for ten days?

Pretty much the whole Antiz and Eastpak team except for Aaron Sweeney and Gabriel Engelke. Oh, you want names…

Steve Forstner and Michel Mahringer from Austria, Julian Furones from Spain, Hugo Liard, Julien Bachelier, Sam Partaix and Remy Taveira from France, Samu Karvonen from Finland, myself from Belgium and Dallas Rockvam from the USA who we met for the first time to see if he had the hobo spirit. Indeed he did. 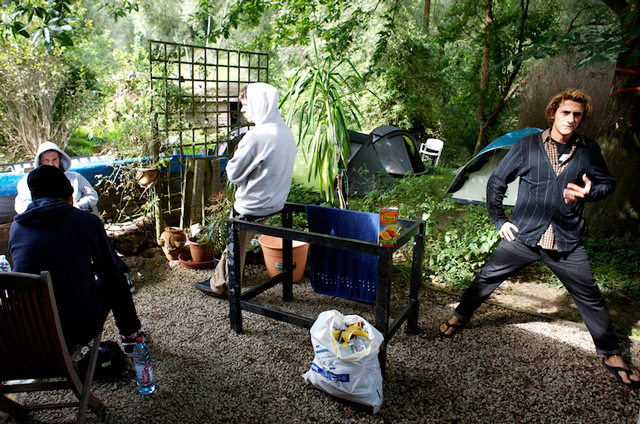 Was Loic Benoit stoked on being on every single tour? Or is he just on a perpetual hobo tour in his own life?!

Loic is one of the original Antiz guys so it’s natural he comes to our tours. But it would be best to ask him this question. Here he is…

Loic: Antiz is my family so that’s why. Even if I’m the main photographer for every Hobo Tour, I like to come and chill with my homies!

After 10 years being on tour, most of them get a little bit hobo style! Skateboarding don’t need that much money…Mostly I’d like to be with my friends and as Steve says “stay pure, stay poor…that’s the life!”

What made you guys decide that this was going to be the final chapter for the tour?

All good things have an end. I guess we will always stay hobos, just don’t want to juice it too much. 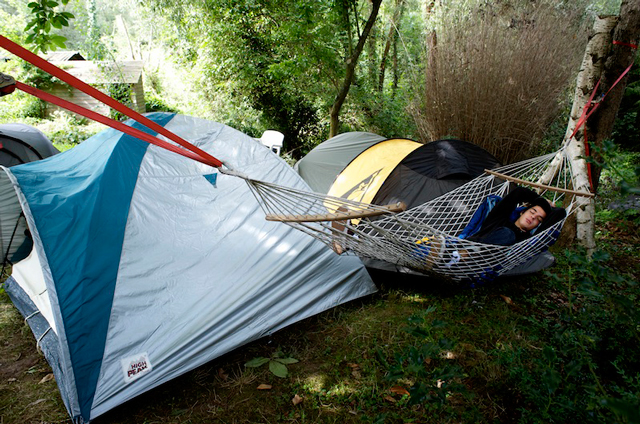 So what are we to look forward to in the book that will be telling the story of the three Hobo Tours?

The book will be a good example of a crew of guys traveling a lot with little money. Just traveling and experiencing new things hobo style with pretty photos by Loic Benoit, Sem Rubio and Joe Hammeke.

You had bikes in the first two tours, how did you get around this time?

First tour was in Andalucia with scooters. Then recession hit, so we got shitty bikes for Berlin. This time it was back to basics: camping in a friend’s garden and moving about with the good old camper van. It rained everyday of the tour and tents did get flooded… bummer.

Did you have any back-up plans for when it rained?

We didn’t expect it to rain every single day! Our back-up plan was 4 cases of Cara Pils, the cheap can in Belgium that costs like 0.30 euros.
We skated everyday anyway. Thanks to our friend Phil Zwijsen we skated covered spots, we switched towns and hustled the way through! 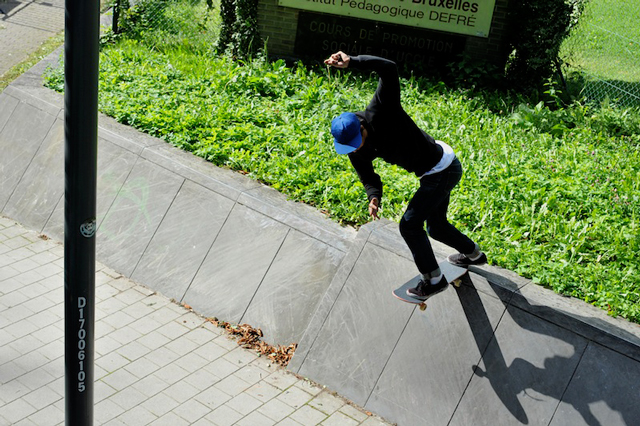 Remy Taveira slipping in a backtail during a rare dry spell.

What on earth happened to Alex’s foot?! Did he stick it out for the rest of the tour doing coffin rolls? Could he drive afterwards?

Alex is our friend from Austria. He came with his camper van but on the first day in the tight Brussels bowl he twisted his foot pretty bad. No driving but lots of Belgium beers were tasted. Alex is a rock. We owe him a skate trip.

How many 360 flips on banks did you do on the entire trip?

Well to be honest I am not sure. As I grow older I start to remember less about skating. Used to know every little single detail about what I did or tried. Let me scan my brain… Obviously the one in Oostende on our blog. Hmmm then, oh yeah, one on the tiny bank in Antwerp… That’s it though. I just do them upon Steve’s requests… You should watch my part in Antiz Antizipated if you are into 360 flips to fakie on banks… Wow that’s a corny plug… 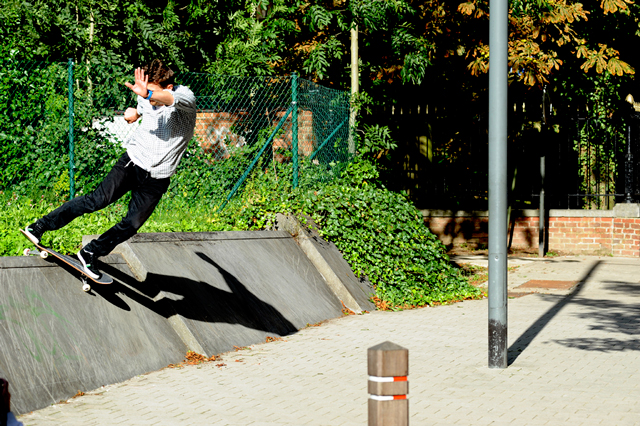 When he’s not 360 flipping Julian is a fan of sugarcanes. Chomp on that.

Haha. Moving away from skating, scan your brain again and let’s hear all about the fight with the two Russians and Remy’s tiny sandwich knife!

So we had a good sunny day and the crew started doing lots of gnarly stuff so at sunset I decided to take the guys to the Belgium pub. We started with a Triple Westmalle which is a triple fermented beer at 9%. It’s real good and from there we just went pub crawl style. We ended up at a sick bar/disco place with rock music. Steve and Samu stole the soda thing that sprays soda pretty strongly and started a wet teeshirt contest between them to motivate girls to get into it as well. Then Dallas puked everywhere, so Samu, shirtless, went to the back of the bar to get the proper equipment to clean up. Yep, Antiz dudes clean their own puke. You should invite us to your place, never to worry about anything.

At the end of the night, guys were waiting for the bus and Paul, our filmer, was on the phone with his lady. All of a sudden he got attacked by two Russians who hit him in the face. It kind of stopped straight away but later on Paul went back to them and socked the smaller guy (not the huge one who actually hit him) real hard and pretty much destroyed his face. Paul said ” you see how if feels to get hit randomly!”.

Police were there and the Russians claimed to them we attacked them but they did not care at all. They were about to leave when Remy pulled out his little knife saying “So, you guys don’t care huh? I am just gonna and stab them guys then, and you don’t care…” They just said ” No, we don’t …” Ahhahahhaha! Oh and when we got in the van, a girl gave us a bag with 10 beer can’s that she just bought for us. “La vie de rêve…”

Wow. Were there any other sketchy encounters that happened on the tour?

That was the best one and the only time we partied. Thing is our crew has high hopes of skating, so since it was raining everyday, we would hope it would finally be good the next day… but no…

That’s a shame. But at least those chip baguettes smothered in burger sauce looked like they were gnarly enough to while away the rainy times. What was the most hobo meal you ate on the tour?

Those ones are the best. It’s called ‘Mitraillette’ which means ‘machine gun’. It’s a french baguette (not a small bit) with your meat of choice, a bit of salad, ton’s of fries and sauce all over the place. 3 euros and you are set! 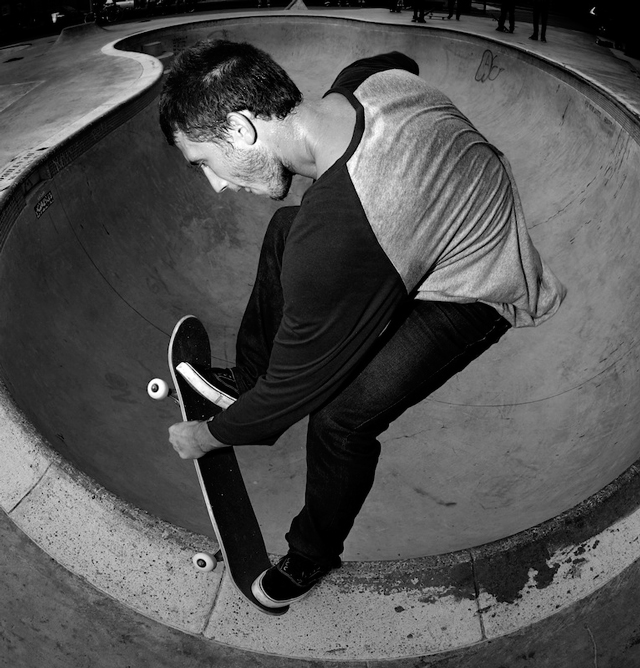 Amped on Mitraillette nutrition Sam knocks out a crailblock in an empty kidney.

What advice would you give to skaters hoping to travel on a hobo budget?

Best advice ever is to just go. Travel. By any means. Road is right there in front of you, no excuse. Then once you are on the road don’t complain and wash the dishes of whoever is hosting and you should be good. Oh yeah also, skate your ass off. Get up and shred. To keep up physically you just need beers and a skateboard.

If you had to open your Eastpak bag on any given day during the trip what would you find inside? What are the hobo essentials?

It all depends. Steve comes with 3 tees, socks and what he’s got on. Probably a spare board. Then you have the opposite with me. I had a backpack and huge bag with pretty much everything you can imagine. Yep, even deodorant… not very hobo, I know…

So did Steve smell the worst?

Steve always smells the worst. You know when he is behind you on a ramp platform or the big handrail. He is packing his Eastpak backpack light for sure! Three tees for ten days… He showered the last day to meet up with his lady though!

Out of the three tours, what one was the best and why?

Personally all of them were great for me, all different adventures for sure.

Would you be up for doing the complete opposite next year? Something like the Antiz Princess Tour… living the dream in swanky hotels and only skating spots especially made for you or would you rather keep it real fo’ life? 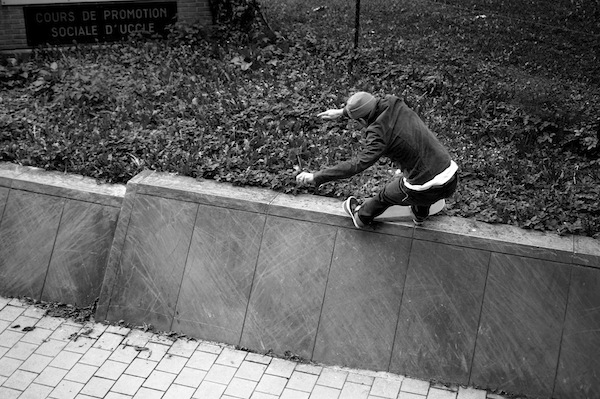 Sam Partaix conjures all of the bad weather into Hurricane Partaix.

Who on the tour deserves a medal for the following:

Gnarliest trick award: Furones almost did a suicidal kickflip drop in underneath the bridge in Antwerp.

Worst slam award: Alex and his foot get first prize.

Most creative piece of DIY award: Belgium concrete skateparks are pretty much all DIY build by skaters! It’s really the Oregon of Europe.

Casanova award: It’s funny because every single guy on Antiz on this tour has a girlfriend, so sorry ladies…

Most boozed up award: Steve could not skate so he wins. Hmm, Alex neither so they tie. They are both Austrians so it’s easy for them.

Most consistent award: On a skateboard? Remy impressed us quite a bit. Every spot got torn.

Dirtiest hobo: When Steve slept with sugar all over himself (Sam threw it over him) not bothering to clean himself up and waking up with glued eyes.

Ultimate hobo: Dallas is quite good at hoboing… A natural I would say. 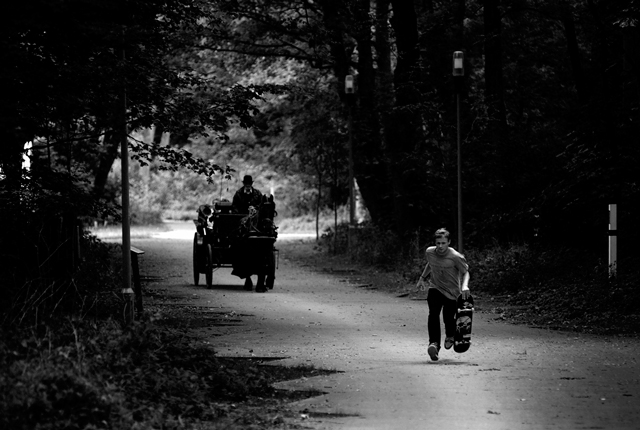 Any last words on the past three years?

Yep. Thanks to Eastpak, Antiz and all the hobos around the world.

Go check the blog. The three years are blogged there. Not very hobo to be blogging you say? Well I am the worst hobo there is….