FEED THE RHINO
The Burning Sons
In At The Deep End Records
www.feedtherhino.co.uk 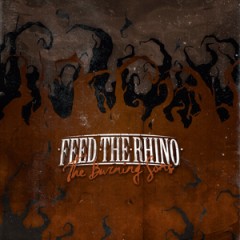 When a band describes themselves as ‘Loud as fuck,’ and is known for insane live shows it’s a pretty clear indication that some serious slaying is about to take place on record. And as Feed The Rhino’s ‘Burning Sons’ roars into action with ‘Flood The System‘, the faint hearted should hide away from the stampede that’s inevitably about to take place.

Instantly the sincere heaviness of the record hits you with the force of a freight train, Lee Tobin’s ferocious vocals lead the way for a crushing assault whilst Chris Kybert’s intense work behind the kit pounds your ears drums. But it’s the grooving guitar work and bass lines that separates ‘Burning Sons’ from the ever growing pile of metal and hardcore cross over bands. Riffs that are tinged Southern Hardcore flair places homegrown Feed The Rhino alongside honorable names such as Every Time I Die and Cancer Bats.

Before the intensity of the album gets a bit much, Feed The Rhino mix things up with a moody, down-tempo number, ‘Razor‘. The track could easily fall into place on a Mastodon or Baroness record. This is where Feed The Rhino really shine. When experimenting with a more dynamic format, such as on ‘Tides’, listeners are treated to a truly thorough performance.

Slightly more variety and perfected production would have seen ‘Burning Sons’ go down as a masterpiece, unfortunately this time around Feed The Rhino have just fallen short of a classic. However the band have still delivered a valiant effort that will surely take their live show to the next level with such powerful new guns being added to their already heavy arsenal.