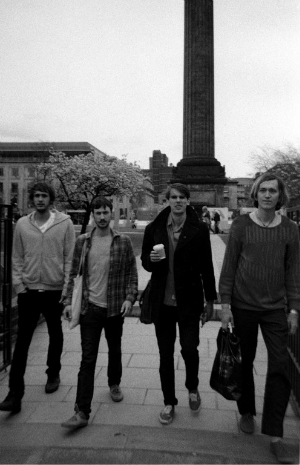 Having made a name for themselves penning singles for the likes of Banquet and Big Scary Monsters, last year Tubelord finally got down to releasing their debut album Our American Friends. Eight months down the line and a series of line-up changes, the band are back with a new bassist and an added percussionist, preparing for the release of a brand new EP.

The intriguingly titled Tezcatlipōca represents a new era for the band, and is said to mark the beginning of a different sounding Tubelord. We caught up with Joseph Prendergast to get the low down on their new sound, preconceptions of time travel and their progress on a second full length record.

Tubelord are back! What’s all this I’m hearing about a new sound?

A few months back at a house party everyone was clinging to the walls, dripping with the effects of what had been stuffed up their noses. In the exchange of sobriety for a general loss of common sense, one of the tenants gave me a keyboard which I took home and wrote some ‘new’ songs with. A couple days later I found a capo under my bed in the shed and added the guitar parts in…new sound is born.

You’ve also been through some line-up changes, what were the reasons behind this?

I dunno man, maybe it’s best not to discuss the reasons and ins and outs on what could be read by anyone you know? Some of the reasoning involves the James Elliot-Field remix of a certain Colour song, that really quick blue hedgehog and sparkly red cardigans.

How do you feel about your debut album “Our First American Friends”, now that the dust has settled and you’ve had time to reflect?

What with all the line-up alterations the amount of time between recording and being released, it’s quite difficult to talk about you know? The recording was complete in the first week of January ’09, the release being set for October 12th, by this time all the songs had altered quite a fair amount, what with the addition of a different bass with an entirely different sound to Sean’s. Maybe I’m side-tracking slightly erm… I feel that we could have built upon the little bits of fun that lacked a musical reference point..bum slaps, secret conversation recordings, book pages flipping, a can of Stella Artois being cranked open and sipped on…all those bits…

The new EP is called Tezcatlipōca, could you tell us a bit about the title and the main themes behind the record?

The main themes involve building upon our preconceptions of time travel and how we understand this concept with a disregard to space as a physical thing, you know? I’ve drawn up a comic depicting the story you can hear through the lyrics to make it a little bit clearer, but it’s set in the Bear Gami universe for sure…more on that next year.

Tubelord has always had unique packaging and artwork ideas – have you got anything special lined up for Tezcatlipōca?

Ahhh I’m pleased you’ve picked up on the packaging…A lot of time is spent trying to ensure any tangible evidence of Tubelord is as unique as the individuals cognitive sense alongside the music. However…I’d rather not type about the Tezcatlipoca packaging right now…I have no idea what may or may not be physical by August 16th. This fella has definitely helped though…

Were there any bands, books or films that you were into during the writing process that might have inspired the content of the new EP?

Sure…The initial idea derived from the Apollo I tragedy, where in a test to determine whether the craft Saturn IB could operate nominally on internal power, the three astronauts Edward White, Virgil Grissom and Roger Chaffee perished in a fire. Taking on board the image of three bodies and their context of space, it got me thinking about using this idea of the subconscious adjective and questioning who exactly puts us through acts and tests to extract the sense behind our contextual use of words? You know…how you’ll say giraffe to one person and they may think of the animal, whilst another might think of a friend due to the nickname ‘giraffe’…err… the invisible matter that is space and how we are capable of travelling through these unseen entities in memories. At the time I was reading a lot about mesoamerica, their use of colour is incredibly inspiring. Other than that…..Evil Dead IV.

Are there any bands you want to big up to Crossfire readers?

So so so many…Koppen, Charles Hamilton, Olympians, Duke Ellington, Medications, Shoes and Socks Off, So Many Dynamos, Dead Red Sun, Slingshot Dakota, Aimee B, Django Reinhardt

With a busy touring schedule ahead of you, Can we expect anything new from your live show?

We’ll only be seen wearing black and carefully place a large naught-shaped light in front of our drum kit.

Beyond touring and promoting the new EP, is there a second full length album in the pipeline?

As it stands there are 9 and a half complete songs, not too many to go before we record..The recording is currently being planned for November.

Other than an intense thank you for even being interested in what we’ve got to say, we’ll leave by communicating what has to be said through the form of video…

Tezcatlipōca will be released on August 16th through Hassle Records. The band will also be curating their own EP launch party on August 7th at Notting Hill Art’s Club. The event starts from 4PM and will include live performances from Aimee B, Dead Red Sun and of course Tubelord themselves. See you there…