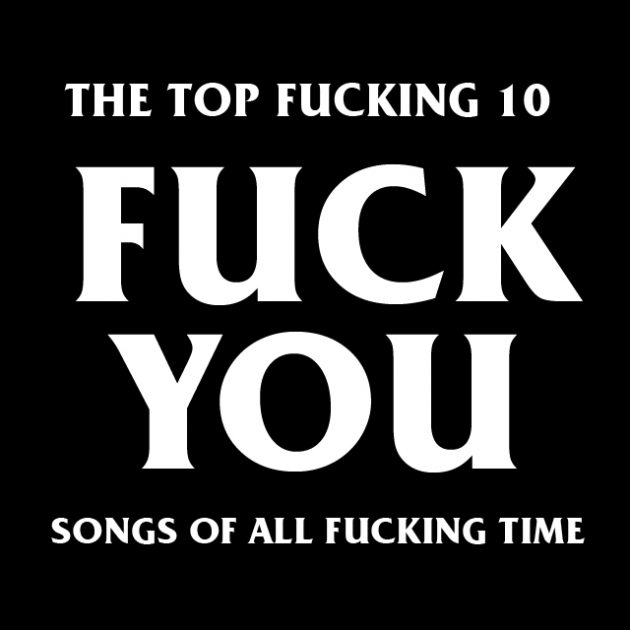 Inspired by the abomination of shite news across the world thanks to the pillocks that were voted to actually SERVE us, we got caught in a fuck-muddle of an afternoon of not giving a flying fuck and decided to do this fuck list. It took no longer than 20 minutes to throw together and if you have better suggestions then leave them in the comments below, or just fuck off. List features are for twonks.

Wesley Lawrence Willis was a singer-songwriter and artist from Chicago. Diagnosed with schizophrenia in 1989, he spent much of his life living on the streets. He had a tough life and a lot to say fuck you about. Let’s all say Fuck You for Willis. RIP.

9. Poison Idea – Made To Be Broken

Frontman Jerry A gets a Fuck You in before the song has even had a chance to get started. And when the song explodes it’s a total aural Fuck You in your ears. Kings of Punk. Kings of Fuck You.

8. Trail of Dead – A Perfect Teenhood

They’ve released a barrage of amazing records and this is up their with their very fucking best.

7. Articles of Faith – Give Thanks

Vic Bondi’s AOF has the best Fuck You in the breakdown of this Chicago hardcore classic. “We must spread this to all people” says Bondi in this tune and it certainly traveled far and wide. It’s a burst of frustration that has always been a favourite for many.

Comedy bandwagon jumpers, Albertos Y Lost Trios Paranoias released this straight up message in 1978. I remember playing it on Glastonbury Radio when I was asked to play there in 1996 and we got shut down and thrown off site. Always better to have a memory like that than a boring one.

“Well, you hate me and I hate you. You never understand the things I say or do – So what’s new? You never liked me so I say Fuck You.” A perfect Fuck You from everyone’s favourite poop-flinging fuck-up. Go find the new documentary, ‘The Allins: One Hell of a Family’ that premiered this winter. Absolutely mental viewing.

Take a break from the barrage of punk rock for Cee Lo Green’s absolute tune with the best message of all time. The first message on this YouTube clip reads: “dedicated to my ex boyfriend”. Nuff said.

It doesn’t get much more fuck you than LA punks Fear, famed for baiting the crowd so much that their gigs would more often than not explode into violence. They truly didn’t give a fuck and don’t care about you, fuck you.

2. The Subhumans – Fuck You

One of the most covered and famous Fuck You songs in punk. Both DOA and New York Metalheads Overkill and The Stiffs covered this, but Canadian (not UK) punks The Subhumans were the ones to do it first.

1. Conflict – The Day Before

Welcome to one of the most super-charged, anarchic, punk rock tracks of all time. A tune that spits venom on the prospect of nuclear war whilst at the same time pays respect to unity and dub. Conflict’s seriously explosive Ungovernable Force album, released back in 1986, is one of the best ways to end a shit day if played on 11. Find it and embrace it, as Colin Jerwood’s vocals are still as relevant today and he will go down in history as one of the masters of all Fuck You’s.

Yes, we know we cheated here, as Jello does not at any point say those two golden words, but in light of selfish politicians stirring up racial hatred worldwide you can suck our oil. Fuck You.