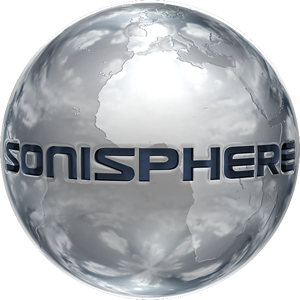 So there are some huge acts playing Sonisphere, including headliners Iron Maiden and Rammstein. Indeed, the festival has been winding its way round Europe with some absolutely massive bills including the much talked about ‘Big Four’ gigs at which Metallica, Slayer, Anthrax and Megadeth played on the same bill for the first time. It’s safe to say that Sonisphere as a brand is making quite a name for itself with some huge line-ups and huge festival sites across Europe. But what about the not-so-huge elements? The festival finally rolls into the UK for its second year on Friday 30th July and, if you squint hard enough, you can spot all manner of up and coming young bands on the poster for the event.

And so Crossfire’s preview of the event is going to focus on all the smaller stages, with just a couple of honorable mentions of bands playing the second and third stages. So take the time out at this year’s festival to discover the little guy. You might just find tomorrow’s main stage stars. Here’s Winegums run-down of some of the ones we think are worth your precious cider-swigging time –

Intense and heavy and skilled musicians to boot; you could do a lot worse than kicking off your Sonisphere with Chickenhawk on the Friday in the Bowtime Bar. In fact, their set has the potential to be a highlight of the festival as the band are guaranteed to put everything they have into fucking some shit up and attempting to burst your eardrums with their unique brand of hook-heavy sinister rock music.

Somewhat of a curveball at a festival for mainly heavy music, female-fronted Oxford-based duo Little Fish have the stamp of approval from Blondie’s Debbie Harry, Courtney Love and Linda Perry. Add to that the intensity of their live performance and you’ve got a band that are definitely worth keeping an eye out for and are certain to provide something different on the Red Bull Bedroom Jam stage on Saturday.

Raucous and slightly strange, Turbowolf play the Jagermeister Stage on Sunday. Prepare to be enthralled by their intriguingly skewed take on classic metal and rock’n’roll. Far from sounding like recycled versions of classic tracks, the band manage to unravel totally fresh-sounding nuggets of raw energy that explode like tiny bombs in a live setting. Catch them. They’re fun.

MARCH OF THE RAPTORS

Bizarrely formed from former members of Adequate 7 and Fireapple Red, March of The Raptors do not sound how you think they might from knowing this info. They produce metallic punk rock that’s uncompromisingly full-on and filled with riffs you wish you could play, even if you’re not a guitarist. They play the Bedroom Jam stage on Friday.

PBC have the ability to provide an oasis of relative calm within the crazy metal-oriented antics of the weekend. Melodic punk with a slight hint of indie rock which enables them to alternate between a flurry of speedy punk beats in one song and a chilled out build-up through pure melody in the next, this band are a gem amongst an eclectic group of bands on the Bohemia Stage on Saturday. Miss them at your peril.

THE GHOST OF A THOUSAND

Brighton’s favourite punks continue their rounds on the European festival circuit with a turn headlining the Bowtime Bar on the Sunday of the festival. Up against some stiff competition from Iron Maiden on the main stage and Iggy and The Stooges on the second stage, we have no doubt that the band will be able to hold their own and play their hearts out as per usual to create a set to remember. Advocating non-violence in ‘the pit’ does not hold TGOAT back from purveying their own brand of hardcore-tinged punk rock. Drummer Mem has to be seen live to be believed.

If you want to hear a band who will baffle your eardrums yet leave you staring in wonder and awe, check out Converge on the Bohemia Stage on Sunday. Their intricate noise-core may not do much for your hangover but the band are just absolutely stunning live. Carnage will most likely ensue as dirty, sunburnt bodies go flying through the air. It’ll be a bit gross but kind of awesome at the same time. Probably not for the faint-hearted.

One of the most legitimate artists of the weekend, you can’t be sure what Henry Rollins will be talking about but you can be sure it’ll be entertaining. And it’ll most likely give you something to think about, also leaving you wishing you were half as eloquent as one of punk rock’s enduring legends. He’ll be on the Bohemia Stage on Sunday providing a little respite from the noise of the likes of Converge.

BRING ME THE HORIZON

Ok, so they’re not exactly tiny but Bring Me The Horizon are clearly destined for bigger and better things as they gear up for the release of their third album. It’s no mean feat for a band of this ilk to sell out the Roundhouse but Visible Noise’s BMTH did just that earlier this year and brought the venue to its knees. On top of that, it’s always heartening to see British talent doing so well across the globe. Ignore the haters and see what all the fuss is about as one of the heaviest bands at the festival take to the Saturn Stage on Sunday.

Gallows have become legends in their own right and, as such, will be headlining the Bohemia Stage on the Saturday. Each and every time you see this band, no matter how many times you’ve seen them before, they never fail to amaze. Their set will be awesome. Standard.

We’ve put together a Spotify playlist of some of the most rocking songs from bands playing Sonisphere who we think you’ll enjoy. We decided not to discriminate against bands on the main stage when putting this bit together so there’s a bit of everything (well, most things) on there… Click on the festival poster below to take a listen. Enjoy! 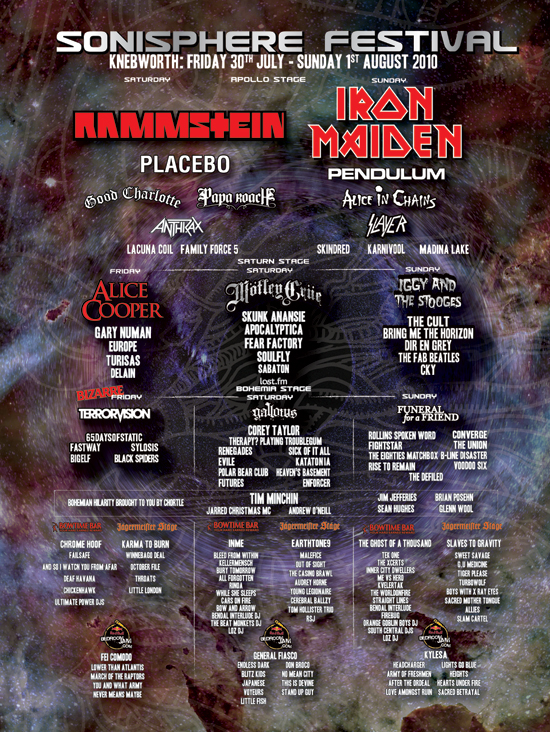 Head to www.sonispherefestival.com for more information and tickets.