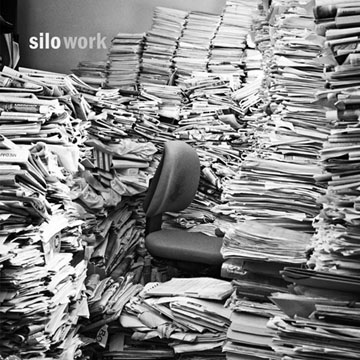 Silo are a three piece band from Denmark, and together they concoct the most captivatingly obscure music you’ll hear this side of the solar system.

If you haven’t seen nor heard of Silo until now, be aware that this is by no means the first time they’ve made some noise. The last time Silo were an active band was some 13 years ago with barely a handful of releases on WIRE frontman Colin Newman’s label, Swim Records, before the band sadly faded out of music and into the perils of ‘real life’.

Thankfully, Silo have ended this vow of silence, and reconvene to bring us a brand new album, Work. This is a particularly obscure body of music and often intensely monotonous, applying the pressure straight form the off. Glancing at the artwork, it’s plain to see where the inspiration for this one has come from.

Fading into brooding instrumental opener ‘Filaments’, you can sense it’s going to be an eventful journey. The first three tracks on Work are as warped and twisted as they come, each built on a sturdy industrial rhythm and a cacophony of clashing guitar frequency. These tracks swing into each other like a relentless pendulum of noise until the bottomless bass hook of ‘Stationary’ gives way, cascading into an interlude of synthesised sensations.

After coming up for air, Silo pick up where they left off with hiphop infested curveball, ‘Cabinn Fever’. The heavy grooves and broken beats of which feature album guests High Priest and M Sayyid, coating this track with their rap verse spat all over it.

Offering itself up as a musical sedative to the chaos that came before, ‘O’ is one of the more mellow tracks on Work, but undoubtedly one of the finest. The droning bass line, shattered rhythms and synth inflections all melt into something deeply twisted and far beyond the norm.

As this journey comes to a close, you’re left with what’s probably the bleakest song title ever. ‘The Inexorable Sadness of Pencils’ chimes on infinitely, shedding a new light on the meaning of monotony.

If you like it loud and left field, Work is an album to get fully immersed in. Silo harness the endless capabilities of effects and computers and run wild with them. Digitally reshaping their guitar hooks and broken beats to make disturbingly futuristic sounds. It’s uncommon to hear music bearing these unexplainable, ultramodern qualities coming from anywhere other than the Turquoise Hexagon Sun studios, until now.

Work is available from April 14th via Novennial Paralysis.