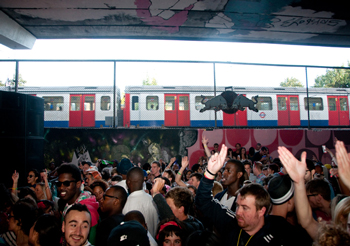 To many, including myself, Notting Hill Carnival is the highlight of the year, the chance to vibes out in the sun, eat copious amounts of jerk chicken and dance with a smile for the entire day. When you add an incredible line-up of DJs, free food and drink and art from the likes of Pure Evil and Inkie, you can be sure that there won’t be one disappointed face in the place. Red Bull’s Major Lazer Carnival Party was, without a doubt, the party of the year so far.

Getting in a little while before Ghislain Poirier’s set, the scene was set nicely with the bars five deep and the bass already wobbling. When the bearded Canadian stepped up, the party was well and truly underway as he dropped his usual diet of dancehall riddims. Ably backed up by his two MCs, his set saw the incredible sight of a man who must have been well into his 50s dancing whilst performing a headstand in the crowd.

Following Poirier was UK producer Sticky who ramped the crowd up immediately by dropping his anthem with Ms Dynamite – Boo – before sending everyone into spasms by nailing Bizzle’s Pow and pulling up three times in the process and dropping another of his own productions, Lady Chann’s Sticky Situation. 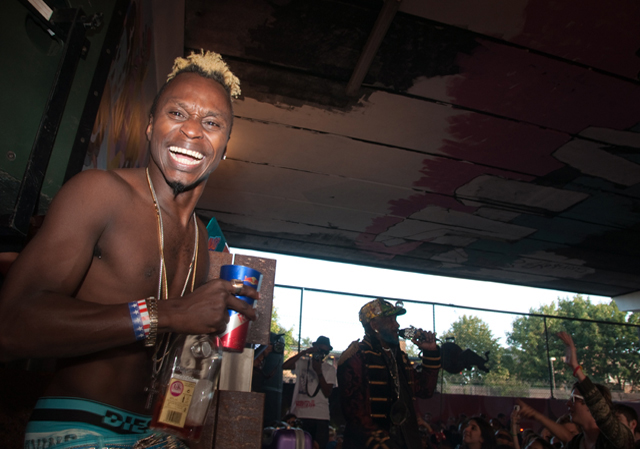 Next up was Trouble & Bass head honcho Drop The Lime with a Rock-A-Billy set. This could easily have fallen flat but when he played tracks like Chuck Berry’s Johnny B Good, it was clear that the party vibes were going nowhere. Despite the guitar music not being the usual Carnival fare, DTL was thrashing around and having the time of his life and eventually submitted by mixing it up with bass lines. Imagine that in the 50s, it would’ve destroyed everyone!

Bristol’s Joker followed and whilst taking a little while to get the crowd’s hype levels back up, he killed it with now mainstream but still awesome tracks Katy On A Mission and I Need Air which he mixed into Mr Oizo’s Flat Beat [nods to Moyboy for that one!] with the crowd also treated to a track of his upcoming album.

David Rodigan stepped up after this and took the entire place by storm. The 59 year old set the first track on its way before running around the decks to face the crowd, beaming, sweating and telling people to make noise. With his T-shirt tucked into his jeans and his pork-pie hat on, he looked like the coolest Grandad on the planet, but he wasn’t about to let his age get in the way of having fun. Wheeling up old records from King Tubby’s studio back in the day and ending with a Bob Marley singalong, Rodigan stole the show, the man is a legend. 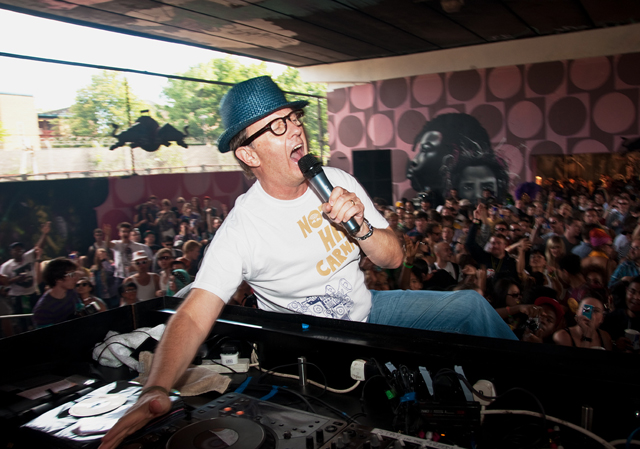 Aged 59, David Rodigan is a legend.

Headliners Major Lazer, the duo of Diplo and Switch looking their resplendent best, stepped up to a rapturous roar of a crowd well and truly in the midst of a frenzy. Dropping everything from heavy dubstep to house, dancehall to bassline, there wasn’t one tune that wasn’t loved by everyone. Gun fingers filled the air and every drop, giant cushions were thrown from one end of the floor to the other as tube drivers on the tracks next to the space stopped to look out and savour the atmosphere below. Of course all the Major Lazer album bangers destroyed the speaker with their MC and female dancer hyping everyone beyond previously unthought-of boundaries and when the legendary Lee Scratch Perry joined proceedings, the evening was complete. Without doubt the best party of 2010 and surely won’t be topped for pure energy, vibes and smiles.

Below you can stream the entirety of Major Lazer’s monster set below, and witness the fitness of the forever young David Rodigan. Get in.