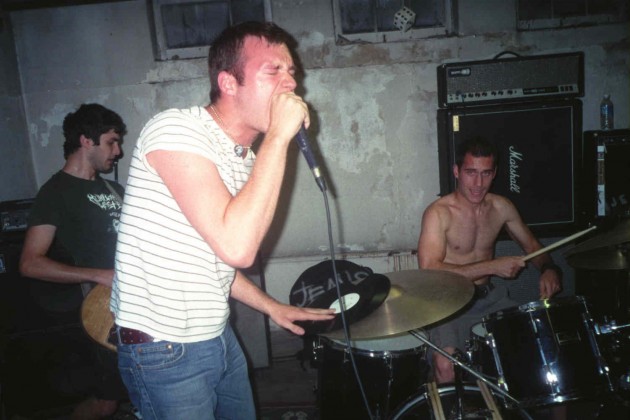 If you tell your mates you like Pissed Jeans, they look at you all funny. When you explain that it’s a band on Sub Pop Records they assume they are loud. And they’d be right. But they’re also really funny. Singer Matt Korvette fronts a band powered like a V12 engine, tauter than a washboard stomach, yet that’s as macho as it gets, since his whip smart lyrics deal with the emasculation of modern man and self loathing on a scale not seen since Larry David last pounded the streets of LA.

Last year they released “Honeys” (Crossfire Album of the Year) which was like Killdozer meets The Jesus Lizard, and despite the title was no paean to their potency with the ladies. Instead it mostly dealt with the pain they feel looking in the mirror in the mornings. They make an almighty noise but sing about healthcare, insurance, awkward parties, office bores and cafeteria food. This may sound like it’s a novelty but Half Man Half Biscuit have made a career out of it, and this is not half baked, it’s full pelt. Think “National Shite Day” just got diarrhea and crapped in your cochlea.

They have just re-released their first album “Shallow”, originally out in 2005 on Sub Pop, and it’s a visceral thrill, showing glimpses of “Bleach” era Nirvana and the very best Amphetamine Reptile used to offer but with filled with subject matter that’s right now, modern manxieties and boy-sterous tales of ineptitude. It’s a heady mix, even if it sounds like Korvette is documenting the do-ing in of his own head. If The Clash or Guns N’ Roses were the gang you wanted to be in, Pissed Jeans are the one you were already in and didn’t know it yet. They give you permission to feel awkward in your own skin and yet let your receding hair down.

I had the chance to ask Korvette some pertinent and some impertinent questions exclusively for CITC.

I love it, how do you think the “Shallow” reissue stands up?

I’m glad you love it! I think it stands up pretty well. That’s one thing that I really like about Pissed Jeans – we haven’t done a ton of records, and I am really proud of every record we’ve done. We still play songs off Shallow live, and a lot of people seemed to be unable to get it or even aware of its existence, so we figured it was a good idea to make it available again.

I have been a big fan of your work for a while and I often find myself relating to, and laughing with your lyrics – does this mean you feel sorry for me?

What? No. I don’t think enjoying my lyrics is anything to be ashamed about. I don’t even think my lyrics are a big deal at all, which is probably why people seem to enjoy them. There’s not a lot of murder and intrigue in them.

How much of Pissed Jeans work is about being an emasculated man? Even the idea of having Pissed Jeans is one of mortal embarrassment right?

I don’t know about emasculated, so much as a ‘real’ interpretation of being a man? Or maybe rather, just my interpretation of manhood? I’m sure it means different things to different people. Embarrassment is a feeling that can be thrilling and horrifying, and writing about that sort of stuff is a good way to kind of work myself through it.

I find that in a lot of drama and adverts, the husband/father figure these days is portrayed as hapless, loveable but basically an idiot, why is that? Do you agree? If so, what do you feel about it?

Is there “Hope For Men” and what is it?

You’re talking to him.

“Shallow” starts with the song “I’m Sick” but it’s not in the same vein as Mudhoney’s “Touch Me, I’m Sick”, you are genuinely talking about being ill, plus in “Honeys” there’s “Health Plan” which details your fear of going to the doctors – why is this such a recurring theme?

Because I am fairly obsessed with my own mortality, and getting older. It’s kind of a fascinating thing, to realize your body isn’t as sprightly as it was five or ten years ago. And it’s also motivation to keep myself from falling into total disrepair. Plus, when you’re injured or have the flu or something, it’s kind of impossible to think about anything else.

Has there ever been a time when a gig has made you feel literally sick?

No, I don’t think so. I actually barfed for the first time during a show last year, but it was from sheer physical exhaustion, and no one knows because I politely ran off stage and barfed out of sight. It was more of a retching than full-on blown chunks, though.

You make banal subject matter sound really angry, how difficult do you find daily life, and how rubbish is modern life?

I think life is both miserable and joyous – who would disagree? There’s a lot of pointless crap involved though, and the beauty of being a vocalist and lyricist is getting to say whatever you want about it. It’s really quite fun.

“Bathroom Laughter” from “Honeys” is a real anthem; does it come from observation at drunken house parties? The video is funny but very dark – the bit where the production assistants are clearing up but ignoring the plight of the infomercial presenter seemed unfortunately totally believable. Have you ever seen those horrific Canadian public information films on safety at work – they seem so banal and end so shocking – it really reminded me of those…have you seen these?

I haven’t! I try to stay away from horrifying YouTube videos. I get affected too easily.

Killdozer seems like a touchstone, how big a lyrical influence has Michael Gerald been?

Seeing as I have to deduce from context clues that Michael Gerald must be the vocalist (or at least lyricist) in Killdozer, I have to be honest and say that he has been of zero influence to me. Never was a big Killdozer fan, but maybe they come from a time and place that I personally missed out on. I have no problems being compared to him and Killdozer, though! Whatever people here in us, that’s cool. 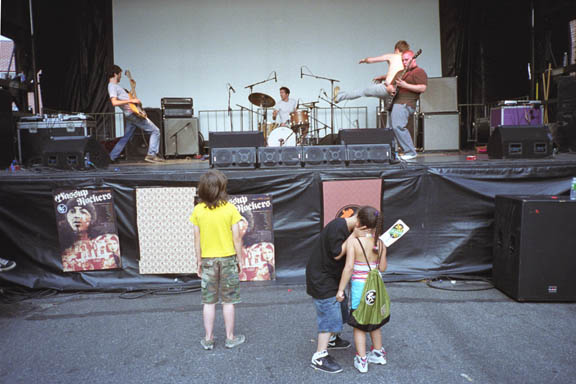 I’ve read that sometimes your audiences come expecting one thing and end up on either side of the auditorium parted like the Red Sea, holding onto the walls for dear life – why do you think that kind of thing has happened? Is it students attracted by the obnoxious name but not being able to cope with the reality?

Really? I never noticed that. I think people generally get what they expect, but also, if it’s a crazy and wild show, it’s because of the crowd that came. If people want to politely sit in chairs and watch us, that’s cool too – we aren’t going to leave the stage and attack anyone, we stay put. Any crowd that is amazed by the violence and energy is probably also the reason for it.

“Shallow” has a touch of Nirvana’s “Bleach” about it – how big an influence were / are Nirvana?

I love Nirvana, and we had a few moments where we’ve though “okay, that’s a serious Grohl drum part” or “that’s kind of a Nirvana-ish riff, don’t you think?”, but honestly those moments happened more on King Of Jeans and Honeys than Shallow.

What do you think about that song they did with Paul McCartney?

I haven’t heard it. I can only assume it kicks major ass. 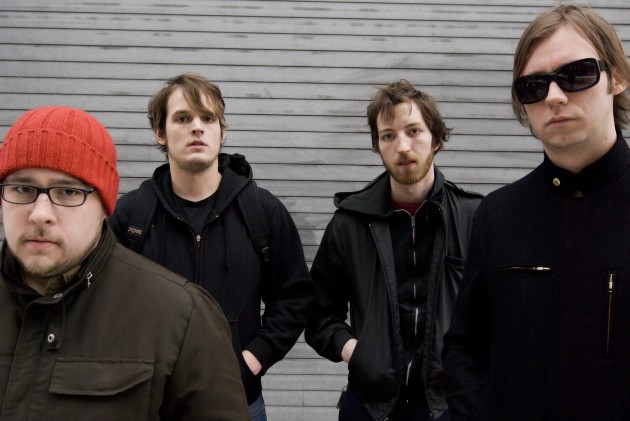 Have you seen the Amphetamine Reptile film? What do you think of all those bands, I had the 1993 AmRep sampler and you could easily have been at home on that?

I haven’t, but I’d really like to! I love music documentaries. I think Am Rep is cool, although I very rarely spend my time listening to records on that label. Much respect though.

There’s a definite early 90s sound but what makes you right now (the lyrics) – do you give a damn about being right now?

I think it’s important that I write about things that are affecting me, and those things are generally happening in the present – thankfully I am not still deeply grieving over my high school dating career or Little League baseball performance. I want to write songs that are relatable ten years from now, but still very much about the present. There aren’t nearly enough people writing songs about iPhones and portable electronic devices, that’s for sure – that shit is utterly shaping our history and existence and it’s scary as hell.

I recently interviewed The Jesus Lizard about their album “Down” which was my favourite but which they hated – how personally do you view your work after the fact? What if someone misunderstands your work and loves it for the reasons you never intended?

I would be disappointed if someone misses my sarcasm and thinks like, bad behavior is good, but I don’t know that that has really happened. Like I said before, I’m really proud of all the records we’ve done overall, so that’s a nice feeling. There are other records I’ve done with other bands that I can’t say that about. 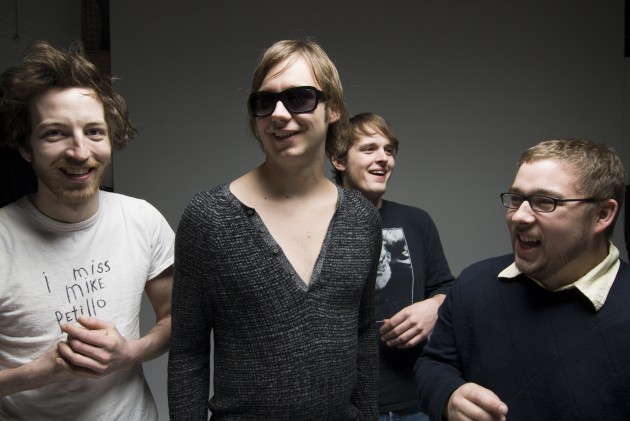 The drumming in Pissed Jeans is immense, what drummers do you admire and why?

Chris Corsano, Brian Chippendale and Han Bennink instantly come to mind. I love drummers that are absolutely totally crazy and capable of insane physical feats. Sean, our drummer, is pretty good, although I want him to work on his upside-down one-handed snare rolls.

Technique is obviously high in Pissed Jeans but how important is showmanship?

Interestingly, I feel that showmanship is far more important for us! I don’t have to worry about having actual talent, but the other guys have been playing their instruments for decades and it’s second nature. We just want to have fun when we’re playing live, really, and I think showmanship, or anti-showmanship, are a big part of that.

You guys look so unassuming; you could be office workers when you walk out on stage, which belies the audio power that emits. As a fellow short-hair Joe Average I have always found that inspiring, dating back to when Helmet first emerged – what role models did you have? How much do you enjoy confounding expectations?

My role models were not office workers, thankfully. I don’t know, I love to dress up in interesting clothes and costumes, probably more than your average person does, but playing shows often results in destroyed clothes, so I generally wear stuff I don’t care about. I think we look decent on stage though, not too nerdy.

The Jabberwocky festival was cancelled, so no UK appearances this year, when do you next plan to drop by?

We came to the UK anyway, cancellations be damned! You missed it. No plan to come back to the UK at the moment, but it’s been a yearly thing lately. We’ve been to the UK way more than California in the past five years, and I’m not sure what that says about us.

Pissed Jeans album ‘Shallow’ is out now from Sub Pop’s Mega Mart or in your favourite record shop that stocks fucking cool punk records. Find it, buy it, listen to it and then destroy it. 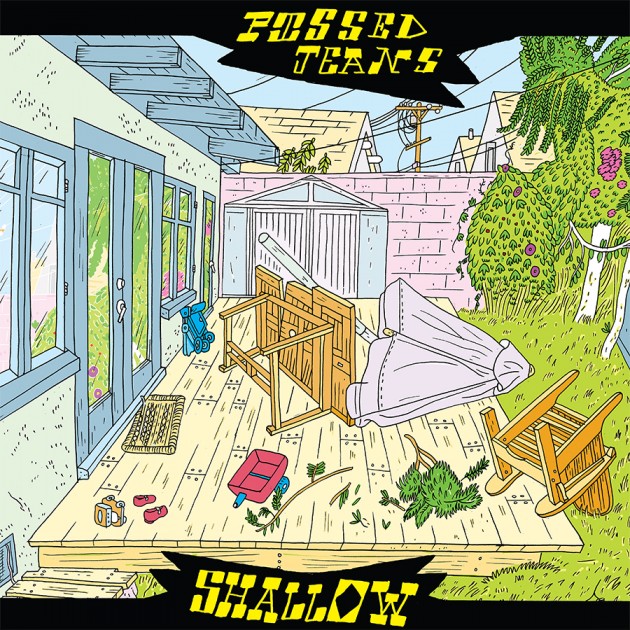