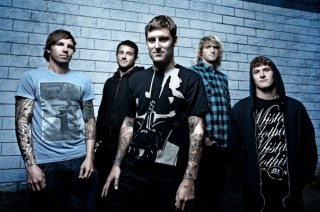 Australian metalcore band Parkway Drive are renowned for their high energy live shows and with the recent addition of Emmure, The Word Alive & Structures to the line up, this November trek is set to be one of the most brutal tours of 2012.

The band start the UK leg of the tour in Birmingham and close in London before moving on to Europe. The UK dates are as follows:

In further Parkway Drive news the band have announced they are releasing a documentary style DVD entitled ‘Home Is For The Heartless’ (also a track name on latest album ‘Deep Blue’). The 75-min documentary was shot in 42 countries on five continents. The DVD captures the bands’ journey as they travel to many obscure destinations around the world and embrace local culture. ‘Home Is For The Hearless’ is said to be an in-depth look at the life of Parkway Drive on stage and off as they tour the world.

The DVD will hit the stores on 9th July 2012 and is available to pre-order as part of a bundle package on the bands official merchandise store.