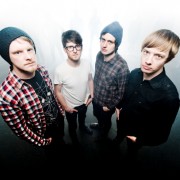 Chickenhawk have released a live mash up of video footage for track ‘Son of Cern‘ which is lifted off their album ‘Modern Bodies‘ released this week on Brew Records.

Enjoy this edit edited by bass player Ryan Clark that also features footage from our Crossfire Halloween Massacre in 2009 where the Leeds band blew our crowd back to the womb.