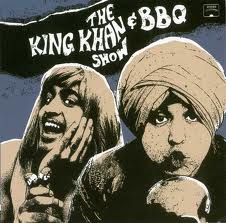 They may have split up recently but King Khan and BBQ certainly laid down a filthy garage legacy before calling it quits.

Allegedly the pair famous for their lo-fi doo wop ended their musical journey at the Sydney Opera House this year after being hand picked by Lou Reed and Lauri Anderson to play two shows at the Vivid Live festival they were curating.

The good news is that Mark Sultan (aka BBQ) is back with a solo album called ‘$’, look out for its release on November 8th.