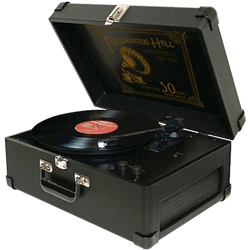 We have come to expect eccentric announcements from eccentric people, and who better to do something like this than Tom Waits.

Following his 78rpm record-inspired collaboration with the Preservation Hall Jazz Band (it was inspired by a 78 rpm recording of Danny Barker’s 1947 street chant “Tootie Ma Is a Big Fine Thing“) the song is to be released on a 78rpm record.

Now, we’re sure some of you have a record playing device and some of you don’t, though we’re even more confident that all of you aren’t in the possession of a record player that can play records at speeds other than 33rpm and 45rpm. Well, the record is to be accompanied with a limited release (504) player specifically designed to play this record. How’s that for a middle finger thrusted towards the disposable music climate we’re currently in?

Have a look at the player over on the right and head over here for more information.