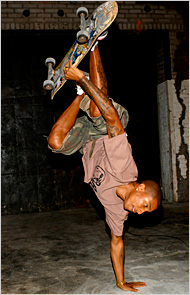 Holy production combo Batman! In an unusual change of events for the french house duo, Daft Punk have been making headline after headline in recent months as we get closer to the release of the Tron Soundtrack. Further unconfirmed leaks aside, it has been confirmed that Daft Punk have produced the new N.E.R.D. track ‘Hypnotize You‘.

The track appears of ‘Nothing‘, the latest album from Pharrell Williams’ (seen doing a street plant back in the day on the right) band and can be seen being performed live on the Late Show with David Letterman below.

It’s a slow funk jam that’s a departure from the dystopian disco sound of Tron and Human After All and a return to the slower, groovier, in-front-of-the-fireplace style sleaze-cheese of Something About Us. Listen to it below.