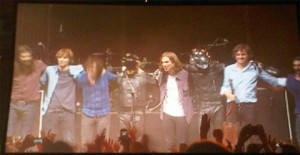 In one of the most unexpected live appearances of the year, french electronic pioneers Daft Punk appeared alongside Phoenix at Madison Square Garden last night during the encore.

Phoenix played an extended version of their popular ‘1901‘ to close their set, during which Thomas and Guy-Manuel were present in their iconic robot outfits playing a medley of their own songs as part of a live remix/mash-up.

Understandably, this unannounced performance set the Twittersphere on fire last night – not only for the idea of two of France’s most popular artists playing on-stage at the same time, but the first time in a considerable while in which Phoenix guitarist Laurent Brancowitz has appeared alongside his former bandmates (in the short-lived Beach Boys-inspired Darlin’) who later recorded the song ‘Phoenix‘ as Daft Punk as a tribute to his band’s success.

Watch a clip of their performance below and head over here to read an interview we did with Phoenix earlier this year.