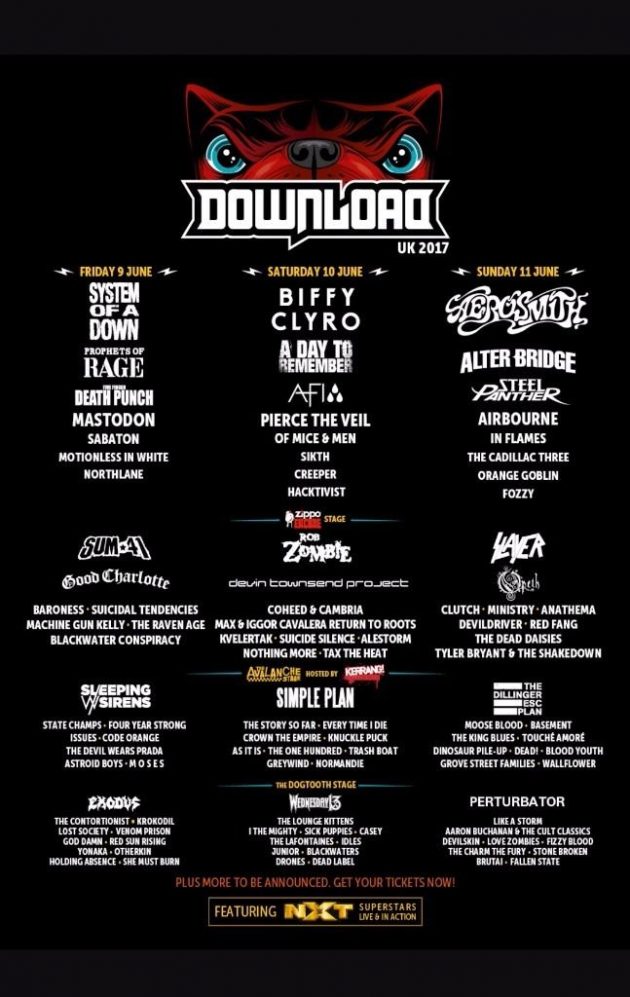 We’ve always had a blast at Download Festival and this year’s line-up is stuffed full of treats old and new, along with the chance to join plenty of like-minded folks in raising a pint or two to another sadly departed icon (RIP Mr Cornell!). Main stage headliners System Of A Down, Biffy Clyro and Aerosmith will no doubt draw legions of fans, but there are also plenty of great bands to be found on the smaller stages and in earlier slots. Here we are to shine a light on some the best…

Given that they recently sold out London’s Electric Ballroom, Creeper won’t be skulking in the shadows for much longer, so this could well be your last chance to catch the Southampton horror-punk crew before they leave lunchtime slots in their cold, dark wake. Taking the malevolent rage of prime Misfits, the anthemic choruses of Muse and My Chemical Romance, and a sense of occasion wherever they play, not even bright sunlight can stop this lot. (Ok, that’s enough gothic cheap shots from me). Remember Trivium’s set at Download 2005? Hey, y’never know…

Hey, come back, their music’s much better than their name, honest! Seriously though, Fizzy Blood are well worth your time. One minute, they’ll be spooking you with vocalist/guitarist Benji’s cold croon, the next, they’ll be stomping all over your senses with the kind of desert rock riffs that would surely have Josh Homme nodding in approval. Slightly deranged, and all the better for it.

Arguably the band most likely to chalk up a score on the Richter Scale, Venom Prison are where doom and death metal collide, and sound gloriously malevolent on the likes of ‘Corrode The Black Sun’. We’ll be watching from the edge with nervous respect.

Channelling the kind of blues-infused rock n’ roll that will never go out of style, Bristol quartet Tax The Heat play tight and loud on no-nonsense cuts like ‘Fed To The Lions’ and ‘Learn To Drown (You’re Wrong)’. Just what you’ll need to shift that hangover come Saturday lunchtime.

Some bands start out as friends having fun together, others are born as musical catharsis for those involved. Blood Youth fall into the latter camp, and the results are as thrilling as they are intense.
Close your eyes whilst listening to ‘Reason To Stay’, and you can imagine vocalist Kaye balancing atop a seething pit, as a packed tent bellow every word of that chorus right back at him. Go make it happen.

Considering the musical crimes committed in the name of pop-punk over the years, Trash Boat make for a welcome surprise; a young British band injecting fresh vitriol and vitality into the genre. Check out ‘How Selfish I Seem’ and ‘Strangers’, and get ready to whip up a big ol’ dust cloud.

We at Crossfire strongly suspect that Love Zombies are not genuinely undead, not least because it’s hard to imagine a band of zombies playing such colourful punky power-pop. Better scarper after their set, though; you never know when the craving for brains might kick in.

Ah, the vicious beast Krokodil stirs once again, possibly to practice its scales.* Apparently,”mostly beards and riffs” remains their modus operandi, and whilst we can’t (so far) comment on the length or density of the beards, we can assure you that the riffs are as raw, potent and poisonous as ever.

Yes, the erstwhile Heaven’s Basement frontman has returned, and he’s armed with a slick but addictive debut album Imagine Alice In Chains and Stone Temple Pilots bonding over some classic Aerosmith, and you’ve got a soundtrack to see out Download 2017 in fine style.

*Sorry, that was terrible. Even for me.