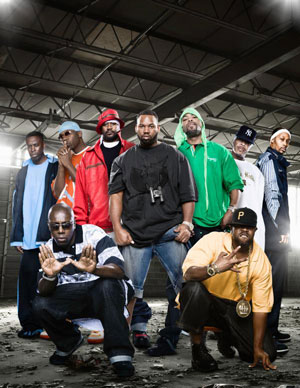 Big shows at the Academy regularly bring excitement to Brixton, but tonight the south London district is positively buzzing. The moment I pop my head out of the tube station the place is heaving with ticket touts, t-shirt sellers and more importantly hip hop fans. This level of anticipation can only mean one thing; Wu-Tang are in town and ready to rock the stage.

As ever with the clan there have been a few hitches, most significant is the absence of Method Man who is tied up with filming commitments. Yes, filming commitments, which probably tells you everything you need to know about how far the clan have come over the past 2 decades. While the members have never been anything short of prolific, the clan these days can essentially be seen as a brand and this most recent tour is their way of keeping it alive.

Not that I’m complaining, I was just five years old when Wu Tang released the now classic Enter the Wu-Tang (36 Chambers), and this is to be my first time seeing them perform as a group. It’s a relief, then, that when they finally appear on stage (about an hour late), they come out all guns blazing. Arriving on stage they launch into an opening salvo of ‘Protect Ya Neck’, ‘Clan in Da Front’ and ‘Bring Da Ruckus’, transforming the crowd’s early hesitancy into a sea of Ws. It’s a set comprised heavily from the group’s first two albums, with classic cuts included from individual members own personal triumphs. Just what the crowd wanted, basically.

What’s great about the performance is seeing how the clan’s characters and relationships take form on stage. Ghostface Killah prowls around and dominates the space, Raekwon is happy in the shadows while GZA is the more mysterious and thoughtful of the MCs, getting the spotlight just once as he runs through his own classic ‘Liquid Swords’. Even the late ODB is (perhaps predictably) recognised, but a run through of ‘Shimmy Shimmy Ya’ goes down particularly well. The most prominent member is by far the abbot himself, The RZA, whose energy is relentless throughout. Bounding around the stage with a bottle of champagne in hand, RZA is definitely in party mood and it’s perhaps him who shines the brightest.

Despite the many positives, the Wu Tang show is not without its flaws. The sound, for starters, is too muddy to give some of the finest hip hop productions of all time the clarity they deserve. Method Man’s absence is also felt at times, and while U-God stands in admirably, Meth holds so many of the groups key verses that he is sorely missed. Even a somewhat thrown together Wu-Tang show, however, is a live experience that is so completely engaging that none of these negatives matter. With so many big personas on stage, it’s difficult to know where to focus your attention. As the clan launch into their last song, a storming rendition of ‘Gravel Pit’, the fans are sent home happy and the brand is kept alive. Even after nearly 20 years in the game, Wu Tang prove that their clan still ain’t nuttin’ to fuck with.