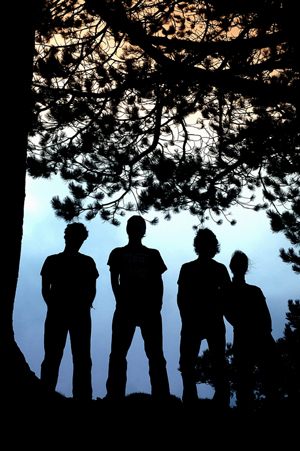 Despite liking my fair share of post-rock, it’s a genre that has a lot of very boring bands. While the Explosions in the Sky template of long songs with big climaxes might have been exciting once upon a time, the huge numbers of bands offering only slight variations on this formula leave much to be desired. Although some of these bands are noticeably better than others, there’s only so much excitement I can gain from another nine minutes of tremolo picking concluding in another swirling crescendo climax.

Thankfully tonight’s bill is free of any such predictability. I have to say, when Leeds’ These Monsters appear on stage wielding a saxophone I begin to fear the worst, yet somehow they manage to break one of rock music’s golden rules and are great in spite of it. There’s something about the overdriven guitars and jazzy brass that doesn’t sit well together, but These Monsters’ sax player overcomes this by screaming into the instruments mouth. It’s a short and engaging set that while difficult to pigeonhole, avoids sounding like a mish mash of disjointed ideas.

Next up are headline band Vessels, who are a breath of fresh air in terms of post-rock; writing songs with strong composition, varied song structures and excellent all-round musicianship. Stripped down slightly since I last saw them (now with just the one drum kit on stage), the band are back with a set of all new material which the crowd are only too happy to feast on. Fans of 2008’s White Fields and Open Devices shouldn’t be disappointed, as Vessels retain their knack for creating music as intricate as it can be vast. Even as band members swap around instruments at will, they appear air tight working their way around complex riffs and arrangements.

As well as streamlining their percussion, the band has also removed the few vocals that littered the band’s debut. This seems a sensible and positive move, as I’m sure the band would admit they have no great vocalist among their ranks and are much better off sticking to their instruments. While this might reduce any crossover potential the band might have had, by focussing their sound they stand more of a chance of being aligned with the likes of Mogwai, who carry the torch for post-rock success in the UK. If any band deserves to follow in their footsteps, then Vessels have made a very good case tonight.