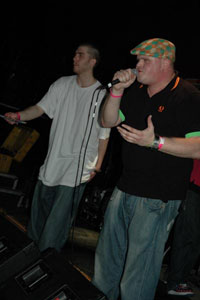 Walking into the Scala and being confronted by a floor full of boys wearing girl’s hoodies and skin tight jeans, topping the look off with a bowl cut, isn’t the perfect way to start a club night I’d been looking forward to for weeks. Still, they’re good to laugh at. Am I elitest? Course I am, but at least I don’t look like some kind of pseudo-barbie eunuch.

Onto the music then, and Radioclit dropped bassline after bassline with their ghettopop anthems, throwing the likes of Bonde Do Role, Dizzee Rascal and other selected bangers into the mix. Apparently the two rudeboys who dropped by obviously to see JME weren’t feeling it, posing as they were like pissed off bouncers. My name was on son, I was in. Gutted.

JME then came out to do a short set sporting his pink “Boy Better Know” t-shirt. Now, I don’t mind a bit of grime here and there, but I was never a big fan of JME and didn’t expect anything special from him. That said, he basslines sounded heavy as hell and despite his constant bigging up of MySpace [seriously mate, its bad enough that I’m addicted to that site, I don’t wanna brag about it in public], he was a good way to pump up the energy for the French electro-hip hoppers.

TTC took to the stage with DJ Orgasmic on the decks and immediately blew the ear-drums out of my head with their glitchy tones. They kept the crowd entertained from the first minute til the last, knocking out old jams like Du Sang Sur Le Dancefloor [tastefully waving tampons around the stage] and Dans Le Club and playing out some of their 3615 TTC album, like the grimey Une Band De Mec Sympa, Paris Paris and the awesome single [Pas Le Peine D’appeler Je Ne Reponds Pas Au] Telephone.

Amongst all their own stuff, they threw in some absolute classics to keep everyone dancing non-stop. I’m talking about All That She Wants by Ace Of Base, the Outhere Brothers, Pump Up The Jam and Orgasmic’s reworking of Justin’s My Love. With Teki doing his solo track Les Matins De Paris and Cuizinier and Tido knocking out Only You it was definitely a showcase in how the French get down.

Right at the end, they invited girls up onto the stage for a bit of a boogie and one thing become immediately clear to me – The lego haircut chicks are the human anti-viagra. Seriously girls, stick to listening to Hadouken, there’s a good trendie. Them aside, the French contingent in the crowd helped out by singing every word, and dancing around like people possessed and ensured I felt right at home. Une bande de mec sympa indeed.