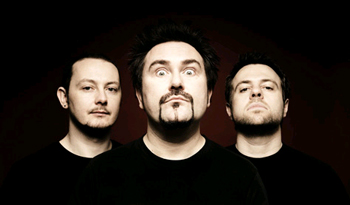 “The last time we played here was when we released this single!” declares a grinning Andy Cairns, shortly before the spidery riff of ‘Turn’ incites roars of joy from the sold-out crowd. Indeed, it’s been a good few years since Therapy? have played venues of this size, but tonight many casual fans have been enticed out of hiding by a very tasty carrot; the prospect of the band playing their 1994 breakthrough ‘Troublegum’ album in its entirety. Unsurprisingly, faded t-shirts and beer guts abound, but this crowd certainly compensates in enthusiasm for what it lacks in youth.

Dinosaur Pile-Up aren’t about to spoil the early-90s revival party. Their marriage of breezy melodies with chunky, rough-edged power chords may have more in common with early Foo Fighters than with classic Nirvana, but there are too many good tunes on offer to dismiss these guys as a mere anachronism. They rock out with the kind of carefree simplicity that all too few bands have these days, and although the likes of ‘Love To Hate Me’ sound suitably huge tonight, it’s tempting to imagine the chaos that would ensure in a small, barrier-less club.

Therapy? have always been an unpredictable and forward-thinking bunch, which suggests that maybe tonight’s nostalgia trip is more of a treat for the fans than for the band themselves. Still, as Cairns and co rip into ‘Knives’, they certainly seem happy enough at the sight of the crowd exploding into action.

Therapy? gig veterans know full well that many of the ‘Troublegum’ favourites remain in their set to this day, and although ‘Screamager’ and ‘Nowhere’ sound as potent as ever, the lesser-aired songs are those that impress most tonight. Notably, the seismic rumble of ‘Unbeliever’ is lent extra ferocity in the live setting, and bassist Michael McKeegan leads the crowd in howls of “CHRRRRIST!”  for a suitably unsettling ‘Lunacy Booth’. These guys have the energy of bands half their age, and a brilliantly self-deprecating sense of humour to boot – with McKeegan proclaimed the ‘Evil Priest’ for the evening.

As ‘Brainsaw’ draws to a close, it’s clear that the band could call it a night at this point, and still leave most of the crowd happy. But we’re not getting off that easily, and they soon return to play a grab-bag of other Therapy? gems. The catchy riff of ‘Stories’ wouldn’t have sounded out of place in the main set, but the real treat comes in the form of their industrial-tinged early favourites ‘Meat Abstract’, ‘Innocent X’ and the closing, sample-infused ‘Teethgrinder’; a sweat-soaked crowd bouncing along all the way.

In terms of ‘Therapy: The Glory Days Revisited’, this will take some beating, but tonight has also served as a fine reminder that Cairns’ crew are not yet finished after 20 years of playing by their own rules. Long may they reign in black.