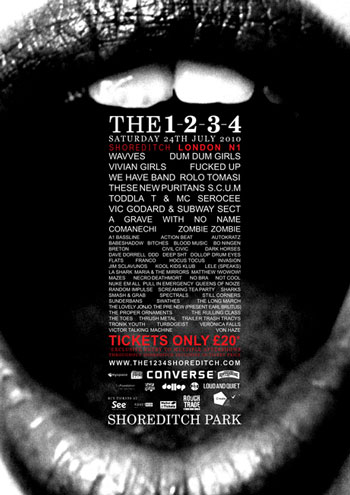 With the festival season now in full swing, it seems as though the country’s venues and fields are taking it in turns to host a myriad of different bands and events. This weekend was the turn of Shoreditch Park, which was the designated location for the increasingly popular 1-2-3-4 festival. As you might expect from a festival based in Shoreditch, the line-up draws largely from the trendier end of the indie spectrum, yet the event promised much variety for a modest ticket price.

After a morning of seeing bits and pieces, London’s A Grave with No Name is the first band to really impress. While the 1-2-3-4 festival certainly showcases a lot of insipid lo-fi jangle, AGWNN pack a little more muscle than some of their peers. The band rattles through a short set consisting of material from 2009’s Mountain Debris, with ‘Sofia’ in particular jumping out of their set as a highlight. There’s something of a slacker vibe about the band reminiscent of San Francisco’s Girls, but their songs carry a weight that is lost among many of their contemporaries.

Next up are the always entertaining Comanechi, who unsurprisingly live up to their reputation. Potty mouthed drummer Akiko Matsuura (also of The Big Pink) is on good form, sporting a giant gold bow to beautifully contrast the filthy angst of songs like ‘Revenge of My Pussy’.  Closing their set with a rip roaring rendition of “Death of You”, the Comanechi prove that even on a slightly larger stage the band are able to hold their own admirably.

Moving over to the main stage there are highly anticipated performances from Californian surf punks Wavves, and Peter Hook performing Unknown Pleasures. Last time I saw the former act it was during their infamous meltdown at Barcelona’s Primavera Sound festival, but they have cleaned up their act a bit since then. This is partly down to frontman Nathan Williams employing a new rhythm section, which are both former members of the late Jay Reatard’s backing band. Even so, Wavves’ sound is mostly swallowed by the big stage, which devours many a band not used to its scale. ‘Hooky’, meanwhile, delivers precisely what you might expect from a bassist covering his former band’s once great songs. Perhaps the diehard Joy Division fans might enjoy this, but Hook’s dad rock posing feels completely removed from what made ‘Unknown Pleasures’ a special record.

While I had my doubts over the scheduling of Rolo Tomassi (one of the line-up’s relatively larger bands) on the festival’s smallest stage, having managed to cram myself into the tent it provided the day’s best moment. Tomassi have quite rightly earned themselves the reputation of one of the UK’s best live bands, but in this intimate setting they are simply electric. The set soon descends into a climbing competition, as members of the crowd follow the example of singer James Spence by scaling the central pole which supports the tent, before launching themselves into the baying audience below. While a dangerous piece of scheduling from festival organisers, this time it pays off and delivers something intimate and special.

Under normal circumstances such a storming set would be impossible to follow, but this year’s festival is headlined by the mighty Fucked Up. There are few bands that can bring off a hardcore show on a festival main stage, but frontman Damian ‘Pink Eyes’ Abraham takes the performance into all corners of the crowd. With his forehead cut open within minutes of the band arriving on stage (a record which Abraham seems continually attempting to better), there are a few frontman who can energise a crowd like this. Ending on old live favourite ‘Police’, Fucked Up provide a spectacular end to the festival, and a promise of much more come on the band’s imminent UK tour.