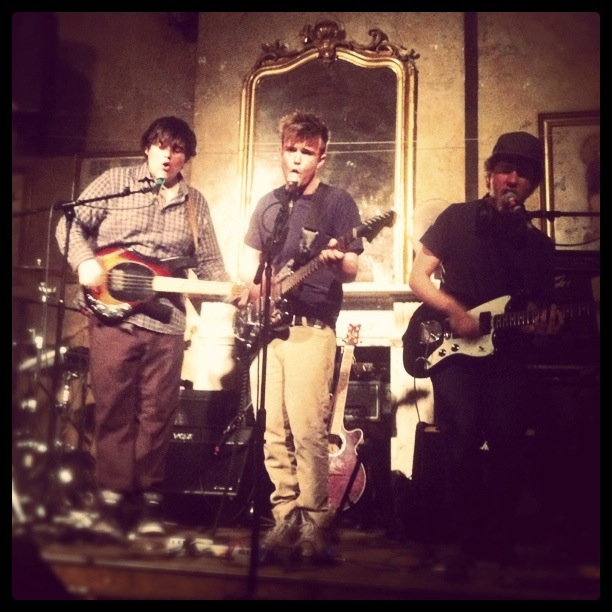 It’s not often you hear tracks by unsigned bands that are so good that you find yourself traveling on the way up to North London, two days after riots have dominated the news. The destruction and terror that emerged this week is only a mile or so from the Old Kings Head in Islington but it did not deter St.Spirit from pulling their show here tonight unlike others out there.

This brand new band from Richmond are made up of five 19 yr olds, who have all schooled together and spent time in a spare room of their parents houses to record what you hear on the web today. The harmonies that each individual member brings to this band form a blanket of lush melodies that compliment lead singer, Myles McCabe’s vocals. In fact, they do it so well that the time and effort behind the scenes for all of this to click so perfectly could only come from dedicated planning to rehearse for such a performance. Everyone has a microphone, drummer and keyboard player included and they are spot on with their delivery.

Musically, this band are playing their own style of heartfelt indie. Every song is awash with intricate musical parts that build beautifully and fade to piano and pre made samples, revealing the imnpressive production levels of this band. Their heroes of My Bloody Valentine may be sonicly more powerful live but the likes of The Maccabies and Coldplay may be more of a starting point in terms of where this band are sat between sound wise. Throw in the swirling, heavyness of Radiohead and you are somewhere close to the mark.

Tonight’s most memorable song is Build A Fire, mainly due to the band’s wonderfully crafted, animated video that is currently attracting attention out there. it was edited by one of the band’s Brothers for fun and conjures up the artistic and thoughtful nature of their music, which only adds to the intrigue of this bands aspirations.

It may be their 7th gig ever, but St.Spirit proved tonight that they could probably be one of those bands that could potentially be headlining the Garage just up the road from here sometime in 2012. If that happens, they may just be that band that cause a riot of their own. Look out for them.