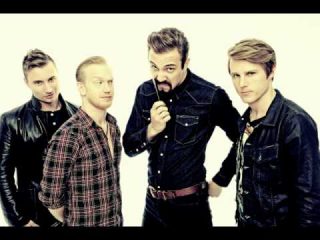 Opening the main stage of an increasingly rain-soaked festival can be a daunting task, not least because most folks present will probably be focused more on getting lunch and staying dry than on any of your band’s efforts to create a rock show par excellence. Royal Republic, however, managed to do just that at this year’s Download Festival, and made it look painfully easy into the bargain. Fast-forward four months to a sold-out Garage, packed with people itching for the Swedish rockers to give them a good seeing-to.

But all in good time. Canadian quintet Bleeker kick things off with some punchy power pop tunes. The venue is barely a quarter full as they start, but they give it their all, and just about manage to edge ahead of the increasingly crowded bar in terms of head count.

Next up are Dinosaur Pile-Up, whose frontman, Matt Bigland, cuts something of a Kurt Cobain figure with his bleach-blonde hair. He’s probably sick of such comparisons, but his band’s way with a melody and love of fuzzed-up guitar action recall the ‘Nevermind’ legends in the best possible way. We’d probably be singing ‘Nature, Nurture’ all the way home, if it weren’t for the headliners.

Some bands play rock n’ roll because they love to, but Royal Republic play it as if they’d otherwise self-destruct – or, at least, go running naked through the streets of Malmo (their hometown). Fortunately, they also do it very well; be it the staccato attack of opener ‘When I See You Dance With Another’, the earworm chorus of ‘Tommy Gun’ or the disco pulse of ‘Weekend Man’ and ‘Baby’, tonight is like a sweaty, bouncy Greatest Hits-style party. Not bad for a band with only three albums (plus the odd EP) to their name.

Granted, the Royal Republic live experience wouldn’t be quite as much fun without the master of ceremonies that is frontman Adam Grahn. A showman in a similar mould to his compatriot Pelle Almqvist (of The Hives fame), he does ramble on a bit at times, but there’s plenty of heart underneath all that amusing faux-braggadocio. When the crowd scream as one for a closing ‘Full Steam Space Machine’, he and his band are happy to oblige, and it’s awesome to witness band and crowd unite for an explosive ending. If this marks the start of Royal Republic’s journey to the O2 Academies and Apollos of this land, it’ll be just what they deserve.