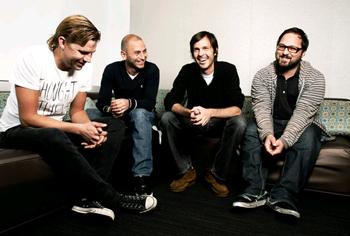 Rival Schools have a bit of a theme going on this evening. Frontman Walter Schreifels is fixated on the introduction of The Beatles’ back catalogue to iTunes. He has a little talk about it, starts a few impromptu singalongs to ‘Yellow Submarine’ and ‘Hey Jude’ along the way, usually when also tuning guitars or sorting something technical between the band’s *actual* songs. This banter works well in the confined environment of tonight. Barely anyone moves throughout the set as we’re all crammed in like sardines and transfixed by the band’s pure brilliance as a mixture of ‘United By Fate’ classics and new album classics-in-the-making are unraveled by the recently re-united band. Having played a few shows and festivals together over the past couple of years, the band have finally taken the next step towards a whole album of new material which is set to be released early next year. It only took ten years.

‘United By Fate’ tracks are unsurprisingly received the most rapturously, but the crowd is equally intent on hearing the new material and a couple of the more riffy tracks in particular stand out as potential equals to the material everyone already knows and loves so well. ‘Undercovers On’ and ‘The Switch’ are particular highlights as guitarist Ian Love’s riffwork blasts forth with potency and brilliance and everyone present sings their heart out. However, the evening predictably culminates with Rival Schools’ most-remembered song – ‘Used For Glue’. And it sounds every bit as thrilling now as it did ten years ago. That’s one song that will never get old to anyone.