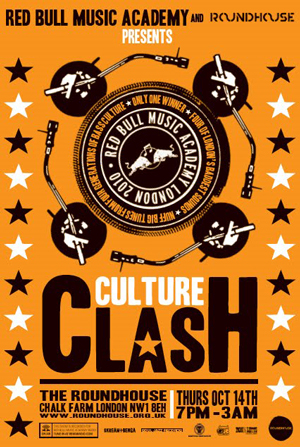 Camden’s Roundhouse has provided the setting for a good number of great shows since its refurbishment and last week played host for the Red Bull Culture Clash which pitted four teams against each other in a cauldron of beats and drums. Each team had their own stage, formed in a semi-circle around the crowd, with each team getting 15 minutes to showcase their talent at mixing styles, dropping bangers and entertaining the crowd during each of the four rounds with the crowd’s volume deciding the winner of each round.

The teams that lined up were Goldie’s Metalheadz featuring Shy FX, Andy C and GQ amongst others, Channel One’s dub and roots stage, Soul Jazz and Skream & Benga’s dubstep stage with Joker, Nomad and Sgt Pokes. Standing in the middle of the floor with the bass booming around me, it was clear that my hearing was going to take an absolute pounding and an hour in, with plenty more time left to go, I was already worrying about how I was going to hold a conversation the following day.

Many big tracks were dropping across the evening but the highlights came in the mixed styles round, which saw Metalheadz open with a mash-up of Nirvana and Benga & Coki’s anthem Night which brought cheers from some and disdainful glances from others. Skream & Benga had already dropped a dubplate with Snoop bigging them up before playing Rage Against The Machine, Biggie and all sorts of other delights. Whilst Channel One didn’t mix it up as much as they could have, the appearance of a live trombone on stage ramped the volume levels up and showed just how powerful old school dub can be, it was like a Notting Hill Carnival soundsystem had arrived late.

There was a little bit of needle during the evening, with Metalheadz dropping a Katy B dubplate branding Skream and Benga as pussies whose career was going to end soon which prompted Skream to declare that whilst the D&B crew made classics, his stage were making them. Nomad got a lot of stick from the D&B MCs which didn’t seem to bother him, but definitely seemed beyond the jokey-insults going back and forth.

All in all, it was a very fun evening. Channel One took the crown that I thought Skream & Benga’s stage deserved to take but all four stages brought some bangers to the plate. I felt a little sorry for Soul Jazz who played a great hotch-potch of styles during the evening but who didn’t have the crowd on their side unfortunately. However, if this is the sign of things to come from the Red Bull lot, we’re in for many more treats in the coming months.