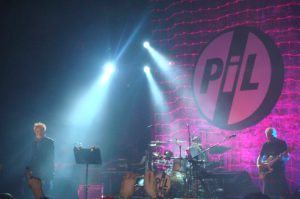 “We don’t take requests, we just play fucking everything,” squawked Lydon when his newly assembled line-up (paid for entirely by his controversial butter adverts) of hugely influential post punks Public Image Limited took to the stage of Brixton Academy last December. It was a statement that turned out to be alarmingly true as well as the band grinded through nearly three hours of the mind-bending rock hybrid that is their trademark. After years of fun but totally pantomime Sex Pistols reunion tours, Lydon was so obviously on a mission to claim his stake as one of music’s true forward thinkers and the first batch of PIL shows at the end of last year did just that, allowing him the perfect platform to deliver his intense anger and bile.

Back again for another jaunt around the UK, the warm acoustics of the Empire seem to soften the band’s sound somewhat. The past Brixton Academy appearance was harsher, more brittle, more suited to the intensity of PIL’s sound and Lydon’s vocal delivery but tonight’s show offers a more clinical and clear look into Lydon’s PIL back catalogue. He’s still on fine sardonic and vicious form, hurling abuse at the music industry people in the balcony. “If you cannot stop slumping into your fat backsides you should all fuck off home, you music industry lot are boils on my backside, you are all fucking cunts, I am above your contempt,” he spits, currently without a record label and probably not wanting one, he is as vitriolic as ever.

The music, as ever, is as relevant now as it was then. Totally undated and unsurpassed, it’s the jarring dub-infused improvisations of first two album cuts like ‘Careering’ and ‘Poptones’ that still effect the most and Lydon’s spine-tingling delivery of ‘Religion’ is still ten of the most intense musical moments you could ever witness live  and the best song about religion ever (stained glass windows keep the cold outside, while the hypocrites hide inside…).

The two plus hour set flies by alarmingly fast as the likes of ‘This Is Not A Love Song’ and ‘Rise’ further stake his claim as a true music journeyman. And with the news that the band will be recording some new material, it would appear that Lydon’s journey is not over yet.