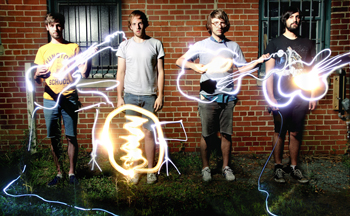 It seems strange that Maps & Atlases have only just got around to releasing their debut album, taking the slightly unusual route of touring the hell out of two EPs before settling down to make their first full record. Over this time the band have come a very long way, starting as a frantic yet soulful math rock group before developing into a folk tinged indie-pop outfit with a penchant for fiddly guitar parts. Given the buzz surrounding their first EP (which still seems to follow them around, even tonight in certain sections of the crowd),  their rapid progression is perhaps unexpected, but new album Perch Patchwork is no dud.

New album track ‘Pigeon’ kicks things off, with vocalist Dave Davison’s vocals sounding impressive and crisp from the off. What a difference it makes seeing the band in Cargo in front of one of London’s best soundsystems, having watched the life sucked out of their performance in a hollow student union during their last tour of the UK. While the majority of tonight’s set is taken from the new album, it’s refreshing to see a band making full use of their allotted set time – treating the audience to old favorites “Every Place Is a House”, “The Sounds They Make” and “Witch”. The band’s attitude on the whole is noticeably great, taking the time to thank the support bands and audience throughout, seeming genuinely humbled by the reception they recieved.

Topping off their excellent performance, the band drop down from the stage to play three songs acoustically in the centre of the audience. Although it’s difficult to make out the muted instrumentation above a less than fascinating facial hair discussion going on behind me, it’s an intimate and special moment in the evening. It’s a shame to have the shine taken off it by a talkative bunch, but even so, finishing on a personal favorite “The Ongoing Horrible” sends this reviewer home with a near perfect parting gift.