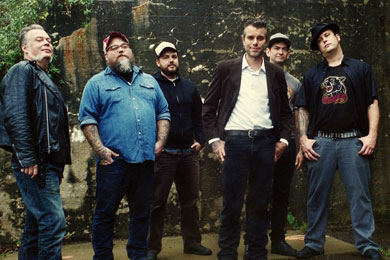 These days, it seems that more and more of London’s venues are covered in corporate branding, so it’s comforting to arrive at the Brixton Windmill and find it still resolutely independent and reassuringly shabby. Certainly, Lucero seem to have adopted it as their home from home – this is the third visit for Ben Nichols’ crew, and tonight is the first of a four night stand.

Sweetheart Contract are Londoners, but their sound is steeped in Americana, with alt-country rhythms, twanging rockabilly bass and even a touch of harmonica in the mix. You could argue about authenticity, but the numerous folks tapping their feet along to the catchy ‘Summer Heist’ and ‘Honesty Is Comedy’ would rightfully ignore you. Singer/guitarist Dexy is blessed with the voice of an indie-pop angel, but sprinkles everything he sings with a touch of gritty defiance. Check them out – you won’t regret it.

Lucero arrive to a heroes’ welcome from a sold-out crowd, but neither crowd nor band seem quite as invigorated as they did five years ago at this very same venue. Still, it’s a cold Wednesday night outside, and old favourites ‘Sweet Little Thing’ and ‘Nights Like These’ are a fine tonic for weary souls, whilst a few tunes from recent album ‘Women & Work’ are lent a welcome ragged edge in the live setting. They play for nearly two hours (but for some reason ignore 2007’s superb ‘Rebels, Rogues…’ album), and by the end, it feels like we’re part of the congregation in some kind of alt-country chapel, with the preachers bashfully enjoying the devotion on display. Six old Memphis road-dogs they may be, but Lucero know – as ever – how to create a sense of occasion.