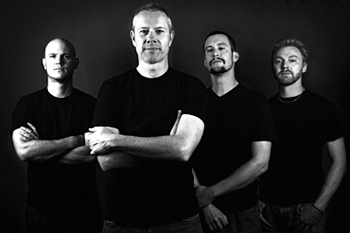 “We want to make London a regular stop!” declares Helmet vocalist/guitarist/sole founding member Page Hamilton, to obvious delight from the crowd. Indeed, it would be nice; this is Helmet’s first UK show in well over five years, and given that nearly two decades have passed since the release of their definitive ‘Meantime’ album, it’s just as well that their absence has seemingly made their fans’ hearts grow fonder.

Two of Northern Ireland’s finest alt-rock bands are on supporting duties tonight. LaFaro’s raw, visceral post-hardcore thrills deserve a far larger audience than a handful of early birds, but the band themselves don’t seem bothered, punctuating the Jesus Lizard-esque sonic mayhem with typical Irish bonhomie. Fighting With Wire plough a similar (but slightly more melodic) furrow, and win themselves a few more fans with the kind of rough-edged tunes that Dave Grohl used to write so well in the mid 90s.

Helmet have never been the most musically colourful of bands; with album number six dubbed ‘Monochrome’, and melody always in short supply. Heavy, dense, pulsating riffs layered over tight grooves is the order of the day, and as Hamilton and co rip into ‘Unsung’, it’s clear that said riffs and grooves still sound as imposing and gloriously bleak as ever. Appropriately enough, Hamilton still resembles a short-cropped drill sergeant, and the now-packed Scala starts to get increasingly sweaty as he coaxes shards of squalling noise from his instrument.

The band have arguably never quite recaptured their early 90s form, but recent record ‘Seeing Eye Dog’ is a worthy addition to the Helmet family, with highlight ‘Welcome To Algiers’ receiving a surprisingly warm reception. But ultimately, neither band nor crowd have youth on their side; so it is no surprise that the closing ‘In The Meantime’ incites a sea of pumping fists amongst the devoted masses.