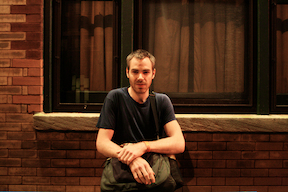 Much like Dischord is for punk, or Pixar for animated films, the Kinsella family can be seen as a badge of quality for emo-tinged indie rock. While brothers Tim and Mike are largely responsible for this reputation, having formed and played in Cap’n Jazz, American Football, Owen and Joan of Arc to name but a few, cousin Nate has also played his part. Having contributed to the likes of Joan of Arc and Make Believe, his solo career under the name Birthmark began in 2007 with debut album ‘The Layer’. Four years on and Nate is on stage in London, about to play in support of album number two.

Beginning somewhat nervously, the band’s offbeat songs gradually warm up the modest, yet intimate crowd. Beginning on drums, Kinsella slowly works his way around the stage, swapping instruments with his band members and banter with the crowd. This get’s particularly interesting as he explains he recently had a spell in prison, after stripping during a show in America’s Deep South. Just being in the presence of the amiable Kinsella makes this seem a shocking revelation; as he humorously goes on to protest his ‘good guy’ status.

Getting back to the music, we are treated to many of the highlights from ‘The Layer’, as well as a sprinkling of new songs. While Birthmark’s playful instrumentation and unusual time signatures are certainly reminiscent of Joan of Arc, Nate’s voice and delivery marks a clear separation between the two. The song’s of Birthmark are more drawn out and considered, perhaps lacking the punch of his cousins’ best work, but making for an engaging and enjoyable performance nonetheless