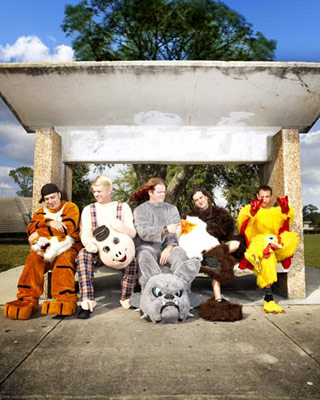 Let’s do the time warp again. Say, to a time when the US ska/punk boom was in full swing, the inaugural Deconstruction festival drew 10,000-odd skanking, spiky-haired punters to east London, and Less Than Jake’s UK profile was rapidly rising. That was TEN YEARS AGO, people; an eternity in music, and one which has seen many of LTJ’s peers split up, run out of steam, or simply fall out of favour. Tonight, the Forum is not sold out, but it is respectably full; and that’s not bad going for a band arguably long past their apex of popularity.

London quartet The Skints are somewhat at odds with the sun-kissed vibe of the bands that follow them, but their rootsy ska sound deservedly finds favour with the early birds. ‘Get Me’ comes across likes the Clash’s ‘Guns Of Brixton’ updated via an Operation Ivy filter, and there’s a refreshing frankness and honesty to the band’s tales of troubled 21st century London lives.

Zebrahead, alas, reside at the other end of the intelligence/subtlety scale. Granted, you can’t fault the Californians for energy and enthusiasm, but the world does not need another Bloodhound Gang – albeit this time with added guitars and very few memorable songs. Add some painfully crass banter and a ramshackle Britney Spears cover into the bargain, and it’s hard to see how Zebrahead will ever escape their UK reputation as the perennial support band.

Less Than Jake are no strangers to onstage dicking around, either, but such antics are forgiveable as they ignite the pit with suitably scorching renditions of ‘Plastic Cup Politics’ and ‘Automatic’. The vocal tag-team of Chris and Roger is still on fine form, and even though the band are leaning quite heavily on 1996’s ‘Losing Streak’ album tonight, they still rip through those songs with same vigour that infuses recent cut ‘Does The Lion City Still Roar?’ (possibly written about Singapore).

The majority of the crowd have clearly grown up with the band, and the resulting sense of affinity is not lost on either side, with Roger happily declaring that the UK has always warmly welcomed them since their first trip to these shores. The only new songs played tonight are a couple of TV theme tune covers from an upcoming stop-gap EP, but even if this is the sign of LTJ starting to rest on their laurels, you can still rely on them to bring some Floridian cheer to a cold November evening.