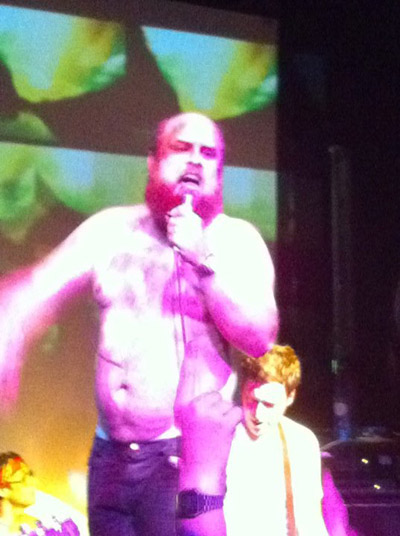 At any normal gig, the sight of a grown man emerging from a spherical tent wearing what can only be described as a fluffy orange poncho, might seem somewhat out of the ordinary. Strange, even. This, however, is a Les Savy Fav show, where we have learned to expect the unusual, and fully embrace the eccentricity of the band’s front man Tim Harrington.

Les Savy Fav are now veterans of the alternative rock scene, I suppose, and the prospect of them playing in an intimate venue such as Cargo is massively exciting. Having just released their terrific new album Root For Ruin, the band lead off with its opener ‘Appetites’, before delving into a set inclusive of favourites old and new. As ever with the Fav, the band is left to hold the fort on stage while Harrington gets down amongst the crowd, who quickly develop into a tangle of mic cables and sweat.

The show is not without its hitches, as Tim’s offstage antics results in a few losses of sound mid-set. These minor glitches, however, are brushed off by Harrington, who incorporates them into his at times self deprecating sense of humour. Frequent attempts at stage diving also fall flat for the frontman, yet he is quickly lifted by the audience who in this moment look up at him as their king. Regardless of things that go wrong, Les Savy Fav are such an entertaining live band that the mistakes only seem to add to the raucousness of their performance.

Set highlights fall after the encore, as the band re-emerge with an inevitable costume change from Tim. It’s another fluffy outfit for the singer this time around, although this time it’s a full body black and white number. The band close with rousing renditions of live favourites ‘The Sweat Descends’ and ‘Rome’, which finish the show on a high. Another special performance for Les Savy Fav, then, but those that missed out shouldn’t worry, as the band return in November for a larger show at the Electric Ballroom.