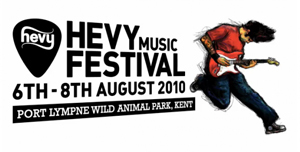 With a line-up to make any fan of modern heavy music squeal in delight, Hevy was an exciting prospect. And, other than a few minor organizational issues which are only to be expected at a young festival, this was an event that delivered everything it promised. Pretty cheap tickets, wildlife park next door, small so easy to get to every part of the site and a line-up consisting of some of the best new talent and much-loved established acts around. Glassjaw, Sepultura, Gallows and Comeback Kid were billed alongside up-and-comers March of The Raptors and Chickenhawk with buzz bands Trash Talk, Cerebral Ballzy and Pulled Apart By Horses thrown into the mix.

Unfortunately for us, we missed Cerebral Ballzy but we can be pretty sure that their raucous performance went down a treat with all assembled seeing as they played to a packed-out sweatbox Old Blue Last in London earlier that week. Trash Talk ended up being first on our agenda and they standardly made jaws drop with their rambunctious approach and no-holds-barred aggression. Despite coming across as a tightly wound angry beast, this band have unparalleled ability to entertain and their set at Hevy is no exception. Once you get involved, it’s a fun experience rather than a confrontational one.

March of The Raptors help to start filling up the Rock Sound tent and the people assembled enjoy the band’s full-on metally punk rock immensely. By the time Pulled Apart By Horses play the same tent, it’s absolutely rammed and hard to get a look-in but the band sound at their top-notch best as they reel off numbers from their enthralling debut including most recent single ‘High Five, Swan Dive, Nose Dive’. Fucked Up bring us back to the main stage with their innovative punk-with-a-twist and they lay the foundations perfectly for fellow Canadians Comeback Kid who clearly become the band of the weekend for many who watch their set. Vigorous hardcore with plenty of singalongs including a slowed-down intro to eternal rock-club-anthem ‘Wake The Dead’ which rouses pretty much every voice present and segues into the original speedy version of the track. Gallows follow admirably with their ever-entertaining on-stage antics, bringing the night to a superb close.

Sunday kicks off for us with Chickenhawk in an absolutely RAMMED Rock Sound tent, rocking the fuck out of an eager crowd. Catching a bit of Failsafe on the main stage, it’s definitely clear to see why they’ve built up a strong underground following. We hear Canterbury from a distance and although they could be seen as slightly out of place on a mainly heavy bill of music, the tunes are solidly catchy and we’re sure they got some people nodding along. Young Guns sound massive on the main stage as their huge-rock tunes get everyone more involved and they leap around like men possessed despite only just arriving from a heavy weekend at Boardmasters in Newquay. Despite our superbly-laid plans to watch The Plight, Polar Bear Club and Glassjaw later that evening, we had to return home and only found out about their performances from enthused tweets and the ensuing online reviews. Still, we did pretty well. Some awesome bands for your buck at Hevy this year. Let’s hope they do similarly well next year! 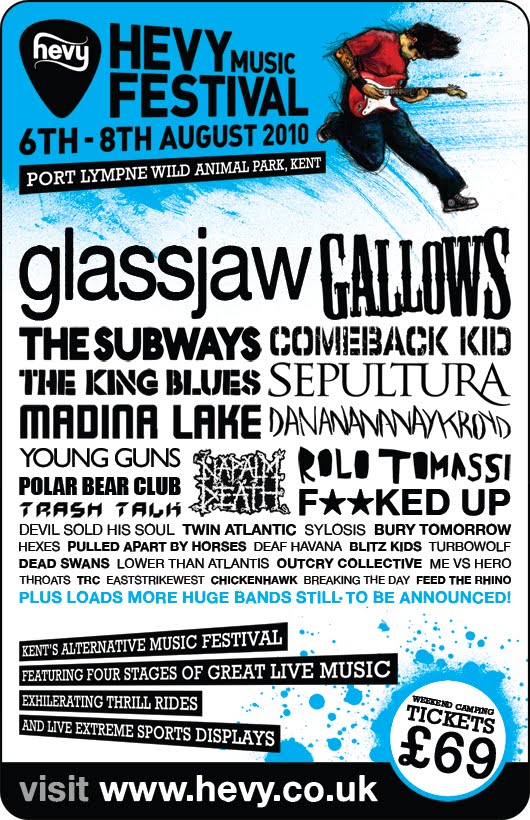