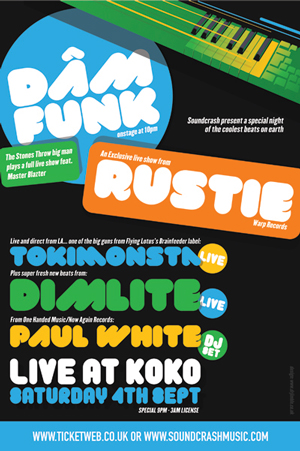 Saturday night at Koko isn’t where you’d normally expect to see such a monster line-up for beat lovers, yet it was in the North London venue that Stones Throw crooner Dam Funk played a headline show ably supported by two of the best DJs around at the moment. Having arrived at the very end of the Paper Tiger [unfortunately not the Paper Tiger of Doomtree fame] set, we caught Dimlite, who dropped numerous heavy beats though many of his off-kilter rhythms found themselves at odds with those on the dancefloor who had trouble trying to figure out just how to move to the tuens they were hearing.

Dam Funk then entered the arena, a black balaclava on his face as he gripped his keytar hard and shouting at the crowd. Backed up by men on the keys and drums, his self-styled funk and soulful renderings brought the swathes of fans out in force and the more he sang, the higher the hands reached for the ceiling. Whilst not the biggest Dam Funk fan in the world, I was still able to appreciate the variety in his delivery, be it angry or laid back and the vibes he took from the crowd were certainly worth being around for.

It was when TokiMonsta stepped onto the stage that things ramped up a little. Her ability to drop glitchy underground tracks next to mainstream rap songs make her sets some of the most fun around and it was no different in Camden. The highlight of the set was Luniz’s I Got Five On It which raised smiles across the dancefloor and on the face of the DJ herself who looked like she was having a great time. It’s a shame the sound at the venue was slightly muddy as it took away from her selections a little, but she rocked it nonetheless.

Rustie was up next and the sound problems seemed well and truly rectified for the Scottish producer. Having just signed to Warp and with a new EP on the way, it was exciting to see what he’d pull out of the bag for this live show and even more exciting when actually hearing the beats. Hearing huge basslines mixed in amongst his cut up bleeps produced serious shocking out moments and if this set is anything to go by, his upcoming releases are going to be absolutely massive.