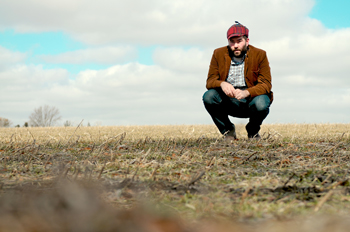 Ah, the Luminaire. This small north-west London venue deserves recognition – not just for its excellent acoustics, good layout and friendly staff, but also for its low tolerance of idiots rabbiting away on their mobiles whilst bands are playing. The day it becomes the O2 Academy Kilburn will be the day I flood the entire city with my tears of anti-corporate rage.

Tonight it’s playing host to Chicago native Owen Ashworth, better known as Casiotone For The Painfully Alone, and blessed with an ability to craft world-weary, lo-fi musical vignettes on little more than a couple of small keyboards. This is his last UK tour after 13 years and 5 albums under that somewhat unwieldy moniker; a pity, as last year’s ‘Vs Children’ record is arguably Ashworth’s best – more sonically expansive and varied than previous efforts, but with his knack for great storytelling very much intact.

Having toured with a couple of friends last year, he’s back to playing solo this time around, and his trusty keyboard/mixer set-up can’t quite compensate for the resulting lack of stage presence. Still, as he kicks off with ‘Harsh The Herald Angels Sing’, the assembled crowd seems happy enough, even though only a few are dancing.

In any case, Ashworth gets by on two things: the quality of his songs, and the sense of intimacy that he manages to create. Between renditions of ‘Killers’ and ‘Young Shields’, he lets his dry humour shine through: telling short anecdotes related to his songs, joking around as he rearranges his keyboard set-up, and fielding song requests good-naturedly. It feels more like the 21st century equivalent of a campfire gathering than any kind of show, and although his songs deserve a far larger audience than tonight’s, Ashworth ensures that his presence will be missed by those in the know.