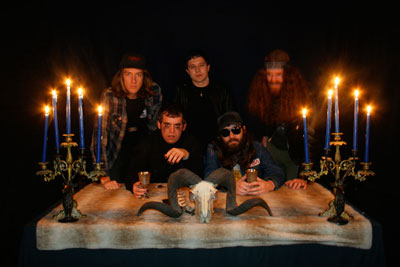 One of Crossfire’s favourite records of 2010 was Black Breath’s undeniable, thrash and hardcore hybrid Heavy Breathing. Having signed to Southern Lord for the release (who can count the likes of Boris, Nails, Earth and Saint Vitus among their roster) the band received wide acclaim for the record, and return to the UK this month for its final hurrah before putting the finishing touches to their next album. Having missed the band at The Borderline last November when they clashed with Touche Amore across town, Black Breath return to the same venue eight months later off the back of a winning appearance at Sonisphere festival.

The band is on top form as they rip through the likes of ‘Black Sin (Spit on the Cross)’ and ‘Escape from Death’ at a frantic pace, so much so that the drummer carries a worried expression on his face as though the whole thing could collapse at any moment. In truth, though, there’s no danger of that, as the band’s rhythm section demonstrate near mechanical levels of control, laying the foundations for searing lines of tremolo picked lead guitar. Their sound is powerful like the best heavy metal bands, but it’s also their directness that stems from hardcore influences that makes them such an intense listen, even more so in a live context.

Two new songs are played from their forthcoming album (due in early 2012, supposedly) which are met with the same enthusiasm as old favourites ‘Eat the Witch’ and ‘I Am Beyond’. The strength of these new songs suggests the band is set to produce a worthy a follow up to ‘Heavy Breathing’, which in itself is a truly mouth watering prospect.