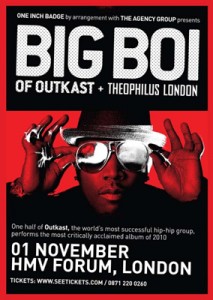 Heading out to Kentish Town might not be everyone’s idea of a fun Monday night out, but walking towards the Forum to see Big Boi, it was as if the Yellow Brick Road had transported itself from Oz to light up the way from the tube station. The venue might not have been anywhere near capacity [much to my chagrin] but once the most talented member of Outkast stepped onto the stage, those that were in attendance were immediately ready for a party.

Kicking things off with some older Outkast material, which many thought he wouldn’t play as it was, after all, a solo show rather, Big Boi got everyone moving and clapping along to ATLiens, shouting about fish and grits before moving into favourites like So Fresh, So Clean. Every chorus was hollered back by the beaming crowd and when he broke into the material from this year’s Lucious Leftfoot… album, the volume ramped itself up even more.

General Patton‘s booming bassline, the sing-a-long chorus of Follow Us and Fo Yo Sorrows all proved their worth and Shutterbug, arguably the biggest of bangers from his album got the biggest cheer of the night. It’s definitely a song that is going to stand up amongst his impressive back catalogue when looking back in years to come.

Hits like B.O.B., The Way You Move, Ms Jackson, Ghettomusick and even the Purple Ribbon banger Kryptonite were dropped around classics Player’s Ball, Elevators and Southernplayalisticcadillacmuzik with his DJ cutting up the videos for every track played on the big screens either side of the stage – impressive indeed. And when he returned for the encore of Tangerine and Ain’t No DJ, it was clear by the response of those in attendance that this was a Monday very well spent.

I just want to be his best mate.