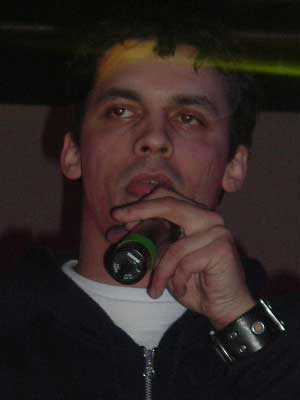 Going to see your favourite group is always great fun, but sometimes you get that nagging doubt in your gut that maybe they won’t be able to live up to your expectations, and you get a little apprehensive about the whole thing.

Well Atmosphere, and their support, Brother Ali grabbed that apprehension, kicked the shit out of it, tied it up and cemented it under a patio at the Scala, delivering the greatest show I’ve ever been to in my life.

After his DJ BK One‘s groove-ridden warm up set was over, Ali strolled on stage in shirt and baggy jeans and a smile on his face. Those that knew of the albino MC went crazy immediately and it only took those who didn’t know about him beforehand about 30 seconds to follow suit as he ripped into his set rapping over a selection of random beats before launching into Room With A View and then spilling a new track, which instructed the crowd to Listen Up. Ali’s beats, produced by Atmosphere’s Ant, are always feel good on record and the live show only reinforced that, as the happy summery melodies floated around the venue gliding around the crowd who swayed from side to side in approval, especially during Self Taught.

The remix of Champion, from his last EP blew the roof off, even with Lil’ Kim’s last beat starting if off, but it was Forest Whitiker, the ultimate feel good tune, which surpassed everything else from his set. He flowed over the organ, explaining that even though people might think he looks weird, when he looks in the mirror he sees “sexy ass me”, and had the entire crowd in the palm of his hand as the chorus of la’s echoed around him. Another one of his pretty tracks followed in the form of Rain Water, before he hit us with a spoken word piece about how beautiful his son is, which was so unerringly heartfelt that no-one in the crowd could have not felt something special about the words.

He finished off his set with two bangers, Bitchslap and Star Quality before knocking out a beatbox which had every head in the house nodding. It was as good as set as you could ever hope for from a support act, and it was made all the more great by his admission that after only 7 minutes, he’d already decided he wanted to come back here soon.

So then it was time for the main event, and it was started with the band, who were playing live in place of a DJ, taking up their instruments signalling the arrival of frontman Slug, complete with parka and furry hood to take the stage. The acoustic Always Coming Back Home To You seemed an odd opener, as it was usually saved for the final number but it fitted perfectly, as if he were letting us know that he was glad to be back in London after 2 years away. That immediately leaned into the unmistakable bassline of Party For The Fight To Write which was sung aloud by almost the entire front 5 rows, which seemed to be made up completely of hardcore Atmosphere fans.

Slug might have been knackered after a gruelling American tour at the end of last year and a whirlwind tour of Europe already this year, but he didn’t let it show as his energy bounded all over the place, and when the awe-inspiring afro’d keyboard player start to play the intro to God Loves Ugly, arguably their most loved song, Slug took it to another level, spitting out the words, giving it as much personality as he could and carried it on through Lovelife and the superb non-album track The Abusing Of The Rib, depicting a relationship with someone addicted to drugs.

From old to new and he fell into Pour Me Another from their last album, lamenting the fact that people have to turn to booze to get his mind away from all the problems in front of them. The applause for the awesome rendition of the track only subsided because of the cheering for the introduction of The Woman With The Tattooed Hands, a which sets imaginations running wild and hormonal boys blushing. After Between The Lines, Slug threw off his hoodie and revealed a Murs t-shirt advertising the Mickey Murs Club and asked the crowd if anyone knew of Murs and Felt [the duo of Slug and Murs] which was receieved with a huge “YES”, allowing Slug to begin Morris Day from Felt’s second album and continuing into Say Hey There, which allowed the band to showcase their talents by giving them a chance to take the ending of the song into their own territory as Slug got a breather.

The biggest shock of the setlist followed though with the inclusion of a song I never thought I’d hear live – God’s Bathroom Floor. This track really allowed the old school heads to enjoy the moment as a group of us sang along amidst fluttering stomachs and delirious smiles, whilst Slug told us he had a date with divinity but she wouldn’t let him fuck. Touching track Little Man came afterwards before arguably the best track of the night, a heavy guitar-led Shrapnel, closed the set. The crowd’s energy went from top gear to a level only NASA would be able to understand as the crunching guitars threw their weight over the chorus signalling Slug’s departure.

The encore came almost immediately after, with Slug returning and telling the crowd it was time for that one song that every band has, that the band themselves hate but everyone in the crowd seems to love more than any other, and proceeded to belt out Trying To Find A Balance, the track which first got them any kind of recognition in the non-hip hop world. To finish off, Brother Ali bounded back on stage, his red face ready to suck every last drop of sweat out of the crowd as the booming Cats Van Bags cracked itself onto the heads of everyone in the venue.

So, when you get two of the best acts in the hip hop underground, a live band who can mix it up better than most guitar bands and a crowd that were baying for more even after over and hour and a half of the main set, you end up with a show so full of character, talent and moreover, fun that you couldn’t help but sit back and admire just how much hip hop brings people together. Rhymesayers aren’t just the best in the Twin Cities, they’re now officially the kings of the world.

Take a mosey to www.rhymesayers.com for all the latest news from the label.