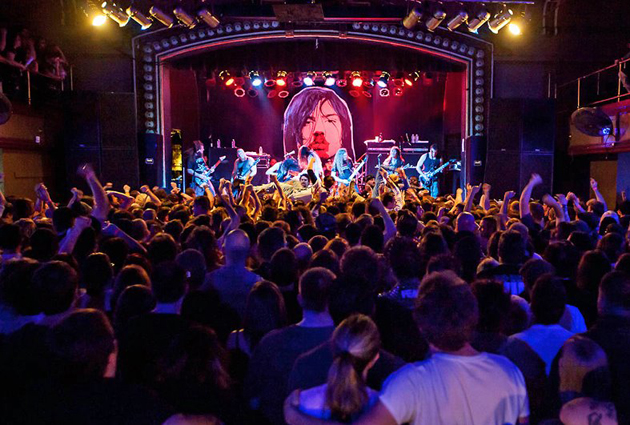 Support from Hawk Eyes and Turbowolf
12/4/12

If tonight’s show was a racehorse, the bookies would have stopped taking bets weeks ago. The chants of “Party! Party! Party!” start a good fifteen minutes before Andrew WK and his band take the stage, and it’s clear that it’d take a fuck-up of monumental proportions for this one to fail.

Hawk Eyes (ex Chickenhawk), however, make music not for celebration but for exorcism. The Leeds quartet are getting better (and more deranged) with time; their trademark squalling guitars now underpinned by a bone-crunching rhythmic rumble. They’re still the musical equivalent of a knife fight in an asylum, but now the inmates have commandeered a juggernaut, and they’re gleefully ram-raiding our consciousness.

Turbowolf are nothing short of outstanding tonight, whipping a decent-sized pit into action with thunderous punked-up anthems like ‘A Rose For The Crows’ and ‘Read & Write’. Vocalist Chris Georgiadis is his usual good-humoured self, and neither he nor his band seem remotely fazed at playing venues of this size. Greater things surely beckon.

Andrew WK’s ‘I Get Wet’ debut received somewhat mixed reviews when it was released a decade ago, but it’s undoubtedly a great party record – a glossy hybrid of industrial intensity and 80’s pomp-rock melodies, all designed to be played at ear-splitting volume to a crowd of people going nuts. He’s playing it in full tonight, backed by a WWE tag-team of a band with no fewer than three guitarists, and by the time the legendary ‘Party Hard’ is unleashed – only two songs into the set – jubilant sweat-soaked mayhem reigns supreme.

There’s no let up in energy tonight – save for the lighters-in-the-air balladry of ‘Never Let Down’ – and a fair few laughs, with ‘I Love NYC’ hastily re-titled ‘I Love London Town’. Mr. WK’s seemingly unshakeably optimism and quest for fun may not have won him much critical appeal, but as the closing ‘We Want Fun’ heralds the third – and largest – stage invasion of the night, it’s hard to think of a show more worthy of leaving your troubles and worries at the door.