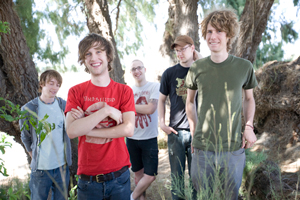 Following their recent split 7”inch with Touché Amoré, we thought it was about time we caught up with La Dispute; one of our favorite hardcore bands of recent years. The split is one of a number of projects La Dispute are currently hard at work on, as they continue to tour extensively while writing the follow up to their stunning debut LP. While that might be enough for some bands, La Dispute seemingly never stop working, with a second split release and the potential of a new EP also in their pipeline.

We spoke with singer Jordan Dreyer, whose lyrics and delivery are central to the band’s fresh and unique take on the genre. Much like on record, Dreyer had plenty to say, giving us the low down on split releases, UK shows and The Wave.

So first off, you’ve just released a split with Touché Amoré, how did this come about?

The TA split came about through a series of conversations between members of both bands. We’re really close friends, and the idea of working together on something – of sharing space on a record – is something we’ve tossed about since we first met. Part of it is intention. Both our bands share similar ideologies and approaches to music, so it made sense to collaborate on something. The other part is admiration. We love what Touché does, they love what we do (I hope. Ha ha), so it was an honor and a privilege to have their songs opposite our own.

All four songs on the record seem connected both stylistically and lyrically. How did the writing process work?

Way back when the idea had first started to gain momentum, Jeremy and I sat down on a porch in Chicago at a show we were playing together and discussed, pretty broadly, a few ideas that we wanted to include in the lyrics to the record. Through that conversation we set down a general concept to kind of dictate the direction the record would take, but also allow us to approach it in our own manner so that you’d see the similarities and differences in our focus and style. It ended up working out really well for both of us, I think, in that it allowed us room to work independently while still giving uniformity to the four songs. And we ended up talking about pretty similar things, which was interesting. As far as the songwriting goes, we wanted to give the record a consistent sound to compliment the consistencies lyrically, so we tried to be aware of Touché’s strong points and tendencies musically throughout the writing process to give the record a pretty steady feel despite being from two different bands. It was a different approach for us, but we’re really happy with how it turned out.

La Dispute has always been hugely supportive of other bands and scenes – tell us about The Wave and why those particular bands are connected?

The Wave is Touche Amore, Make Do and Mend, Defeater, Pianos Become the Teeth, and ourselves. The name has no particular meaning really, although it makes for hilarious water-related puns. Really, it’s something fun for all of us – like being part of a cool club in your neighbour’s treehouse when you were a kid. It came about because we’re all friends and we all care deeply about music and the community of music, and because we care about each other’s art, so it just made sense. More than anything, it’s a way for all of us support each other, and to support emotionally challenging music in general. So, much more Wave stuff will be surfing down the pipeline in the future, so keep your snorkel nearby. I’m pushing for a 5-way split and a 5-way tour immediately after the split. We’ll see. Catch The Wave. 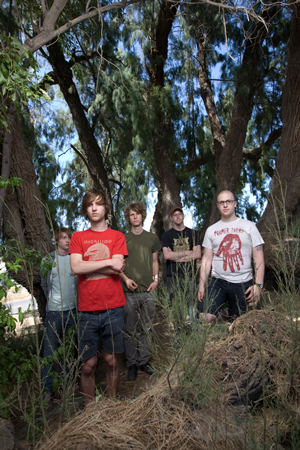 You’ve also got another split release, this time with Koji, lined up for November. Why is the split record appealing to you as a format?

Awesome unintentional segue. The split format has existed for many years and has produced a number of really interesting and powerful collaborations. Splits accomplish a lot of things that make it immensely appealing to us. First, it’s just fun to share record space with friends and artists you love and respect. To be mentioned in the same breath as Koji or Touché is incredibly flattering, but to be opposite their songs on the same record is pretty unreal, and not just because we love their music, but because we know and love them as individuals. Second, it makes for interesting contrasts. People get so caught up on liking one specific genre that they close themselves off to the lot of everything else. Putting two different bands on the same release gives people the opportunity to branch out, to notice the similarities as much as the differences, and makes for an interesting musical examination in the process. Third, it exposes both bands to people who might’ve never heard the other were it not for the split. Now all the people who listened to us but not Koji will get to hear Koji, and vice versa. It’s a helping out a friend and being helped out by a friend thing. Really, splits are cool because you get to work with friends. That’s why they’re so appealing to us.

It’s certainly great to see a lot of awesome splits being released recently. How do the songs you wrote for the Koji release differ to those with Touché Amoré?

A lot more low key. We tried to give this split a certain uniformity sonically as well, so we stripped things down a bit. Think, Fall Down, Never Get Back Up Again, or even some of the HH stuff. It was really challenging to switch it up so drastically from our normal volume and intensity, but it was really fun and made for an interesting end product.

Going back in time a little bit, it’s been a couple of years since you released ‘Somewhere at the Bottom of the River Between Vega and Altair’. It’s a record that we love here at Crossfire HQ, but how do you feel about it now the dust has settled?

First off, thank you. Second off, I think we feel the same way we did about it 2 years ago. We’re really proud of the way it turned out, and we’re immensely flattered that it’s mattered to some people. Honestly, we hadn’t the faintest idea what would become of it or what we wanted to come of it while we were writing it, and the fact that people paid attention and enjoyed it, or even listened to it in the first place, is pretty flooring. We put our heart into it, and we’ll always be proud of it for that reason. On the other hand, it’s been two years. We’re all very eager to see what we’re capable of writing now, and ready to start playing new songs live. We’ll always love Somewhere, and it will always be a part of what we do, but we’re ready for the next installment.

The album resists easy categorization, but I imagine journalists are still keen to try. What’s the strangest description of the band’s sound you remember reading?

Oh, man. I have no idea. Any categorization is pretty strange for us. We don’t sit around trying to think of what genre we play, or what niche we fall into, we just enjoy writing and playing the music that we do. Titles are divisive, but more than that, it’s just never been on our radar. We all listen to different stuff, so it ends up a sort of amalgamation of sorts. Anyone elses description is as good as one we’d be able to come up with. The funniest descriptions come from people critiquing my voice, probably. I’ve heard whiny Will Ferrell before. But the best will always be “entirely Fred Durst.” Brilliant. 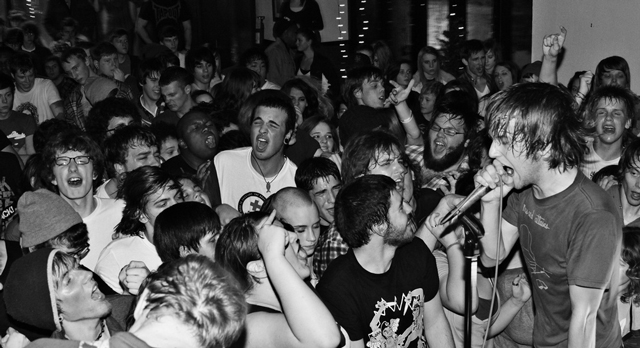 Are there any plans in place to continue the Here, Hear series of EPs? The three existing parts have covered a fair bit of ground, where might it go next?

For as long as we make music we’ll make Here, Hear stuff. It’s one of the most enjoyable and rewarding parts of being a part of this band. As for where it might go, who knows? We’ve thrown out a lot of ideas, but we haven’t really set down to get started yet, and might not for awhile, but I’m sure some sort of shift in approach will occur.

Having quite a unique and potentially divisive sound, how do different crowds react to you? Would you rather play to like-minded people or do you equally enjoy the more difficult shows?

You recently came over to the UK as part of a European tour, but the selection of dates was quite unusual. What was the thinking behind that, why not play a London show for example?

You’d have to ask the person that booked it. As far as I know, the dates we took in the UK happened because people in those places were willing to make a show happen. There weren’t promoters in London willing to do the show, so we went where people would do the show. We didn’t pick the locations, the locations picked us, I guess.

Are there any plans to reach the UK again soon?

No definite plans yet, but we’re working on making it happen sometime in the relatively near future, probably after we put another record out, but hopefully sooner.

What’s the status of the next La Dispute full length record, are the wheels in motion yet? What can we expect from it compared to the last one?

The wheels are very much in motion, my friend. And I’d say you should expect a lot of storytelling, a lot of groove, and a more of an organic feel than the last record. But we’ll see. It’s all a skeleton right now.

Finally, are there any bands or records from 2010 you want to big up to Crossfire readers?

The Wave, Have One On Me by Joanna Newsom, and Eyes and Nines by our dudes in Trash Talk.