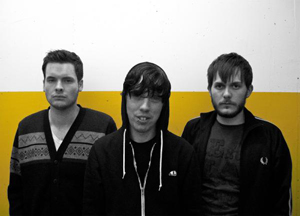 Hailing from Brighton, Rooks are one of those new bands out there that were recommended to us off the strength of their debut video. The band were formed three members of other acts you may have heard of if you’re used to slipping on snot, sweat, blood and black vomit in underground punk venues across the UK. Rooks are the phoenix that flew from the collective ashes of balls-to-the-wall punks Phinius Gage, the slightly poppier Not Katies and the progressive hardcore outfit, Second Monday. They’ve already had a video banned and they’ve only released one single… the shouty, gnarly and instantly attention-grabbing ‘Bet It All On Black‘.

We caught up with Luke Hefson (bass & vocals) not so long after they mopped up all the black sick to find out what it’s like making the cheapest video ever, why Rolf Harris didn’t make it into the band and what they’d do to Scouting For Girls if they were armed with an deckchair. Boys and girls, we introduce you the fantastic Rooks…

So you are all ex-members of other bands, spill the history?

We all knew each other from being touring buddies in our old bands. Ade was in Phinius Gage, I was in Not Katies and Fred was in Second Monday. We all live in Brighton and had wanted to play some punk music again, so getting together and forming Rooks seemed quite natural.

We met at an AA meeting for severe crack-cocaine addicts. Only four people turned up that day – us three and Rolf Harris. We would have got Rolf in the band too but he had other wobble-board commitments.

Your overall sound seems to have hardcore influences in there somewhere, what bands have you all grown up listening to that you would openly call an influence?

We actually have quite different opinions on the music, although there is certainly some common ground. I guess this common ground would be punk music so that’s why we’re a punk band. We all like Refused, The Descendents, Nirvana, The Hives… to name a few.

There’s some good shit in that list. What part of the country are you all hanging out in?

We practice in Brighton, the best town in the UK.

What’s going on down there right now in the scene in terms of other bands you are into?

This sounds harsh, but I think we’re all a bit out of touch with the ‘punk’ scene in Brighton at the moment. Don’t get me wrong, it’s an awesome scene and from what I can tell there’s lots of great bands, but we only played our first gig with other punk bands the other day. For some reason we tend to play most gigs with indie bands at the moment, which is fun because we tend to scare a lot more people. Indie kids don’t like spitting apparently.

Name 3 bands you would die to play on the same stage with?

Rocket From The Crypt, Mastodon and Blur.

Now that would be a bill to hit the musical hisory books. Name 3 bands you would like to fight on Brighton beach and why? Bear in mind the only weapon you have are deckchairs…

Hmmm… that band Go Audio, or ‘Go Fuck Yourself’ as I prefer to call them, Oasis and Scouting For Girls. Go Audio because they typify that emo-radio-rock crap that has over-saturated the place recently. But I’d only lightly hurt them as at least they are having a good go at it. Oasis.. well, just because they have split up, it doesn’t mean they’re not cunts and Scouting For Girls. Well, they’re just the worst thing in music aren’t they? I’ll break the deckchair legs off and stab them through their hearts! 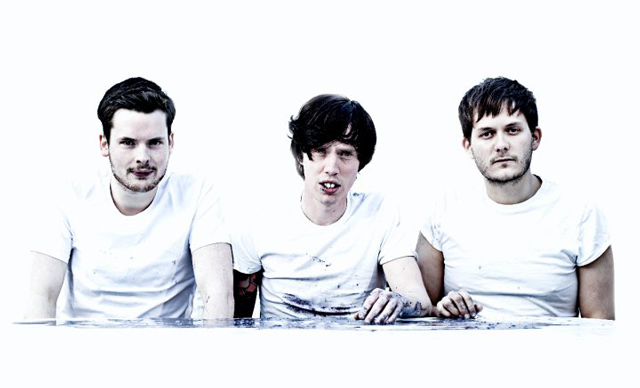 You have a pretty fun video for ‘Bet It All On Black’, looks like the cheapest ever made, explain this puke fest please?

We’re very lucky that one of my best friends is a great promo director and he’s happy to do videos for us for next to nothing – we just have to come up with gnarly ideas. So we settled on the idea of drinking 6 pints each of black milk and trying to bring as much of it back up as possible in one take!

Ade really struggled as he’s not very comfortable with puke and he could barely sing along. I had no problems – I like puking. I tried to vom on Ade’s head but I couldn’t quite get it out at that point. I’m still disappointed with myself to this day.

Did this video seriously get banned?

A few music video channels said that they couldn’t play it because it breached Ofcom’s taste and decency rules. So yeah, I guess it did get banned… fuck it.

Mike Prior who directed it also did the recent ‘Heartsink’ video for Blood Red Shoes, what possession would you have taken to that video shoot that meant something to you and smashed to pieces?

I don’t know if I could have taken anything and trashed it. I don’t really have much stuff, as I’m pretty good at just throwing old stuff away and what little sentimental stuff I have I’d want to hold on to.

Maybe I’d just take something really horrible down to the video shoot to freak people out a bit, like a gimp-mask. I could tell the other people on set: “I’m just not into that shit anymore… I prefer harder stuff”.

So there must be more coming up, are recording your own album or have someone on hand to make it with you?

Again, we’re very lucky, as we have a good friend that owns a studio and he is happy to do some pretty spectacular mates-rates for us. We’re just finishing off the last few songs for our debut album. Considering we’ve only been a band for less than a year I think that’s a pretty good work rate!

What are we to expect and when is it looking likely to be released?

The record will hopefully be out in the New Year. Expect some pretty upfront lyrics and lots of gnarly riffs. That’s generally the Rooks vibe.

Lastly tell us 3 things that are most fucked up and random about all of you?

Fred:  I got beaten up when I was in my old band by a promoter that wrongly accused us of stealing and then we had to jump in the van and get away even through the driver was drunk. That was a really bad evening.

Ade: Doing the Rooks video was fucking awful. I’m basically unable to vomit on demand, even though I drank 6 pints of milk and had the crew shouting at me to get on with it the whole 2 minutes of shooting.

Luke: ‘Chemistry’ by Girls Aloud is one of my favorite albums of all times. I’m not even joking.

…and on that note check out Rooks in their debut video and look out for them on your travels.