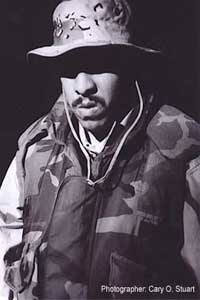 Born in a military hospital in his native South America, Immortal Technique came over to the States to live in New York.

There, he got into hip hop and after a stint in prison, Tech came out intent on bringing his politically charged anti-Government message to the masses. After 2 albums on Viper Records, Tech is back in 2006 with “The Middle Passage” and, as ever, had a lot to say when he spoke to Abjekt.

What’s the news on The Middle Passage? Can we be expecting it to drop in 2006?

You can expect it to drop when I release it, I’m working as hard as I can on that album and a movie, executive producing, making beats and another mixtape to follow the album.

I read in another interview you said you were going to deal with your problems with major labels, is this still the case?

Deal with my problems? Like machine gun them niggaz. Not right now. But eventually I have to go back to the table they just better talk right this time or I’ll leave and make more money without them. I sold about 80,000 units of Revolutionary Vol.2. I have no ego about myself, that’s the only reason they give a fuck about me. They don’t care for my music or for anything else, I mean look at the “talent” they sign, they just want something they know will sell.

You’re the Executive VP on Viper Records, which released your first two albums. Are you completely involved in the releasing of your music from the very start to the very end in this capacity?

I’m actually the president now. And yeah, I run the show.

You’re now associated with Babygrande records, home to the likes of the GZA. How did that come about and why did you join up with them?

I have a distribution deal through babygrande for one project. I ain’t signed to no one. I’m still independent and take orders from one person. Me.

When you came over to London and rocked the Islington Academy, you had cats spilling from the doors it was so packed. That must have been a great sight for you, to see you get that much support?

It just goes to show you that the love of hardcore street hiphop that talks about real shit is still there. If you talk about the hood, and rep for the hood, and really talk about the issue that we face in the ghetto people relate to that. Whether it’s a ghetto here in America or in London, or Paris, or Nigeria, Jamaica, Colombia the colonization is the same basic set up. The brutality and the extent of poverty is different especially in the 3rd world but the principles are a set standard of mind control. Even if people are not from the hood they feel it.

They know that the skewed view of the world they are being presented with by corporate controlled media is bullshit. I look forward to returning to London for an even bigger show. Something to showcase new material, sell some new shirts I’m about to make and show the UK I have not and will never forget about them. I just ask they be patient with the new album, I am not into rushing music and cheating the supporters out of a quality product.

Do you have any plans on returning to these shores?

What got you into being proactive against how the world is run? Was it music? Or works written by anyone in particular?

I was just tired of seeing niggaz talk about streets but talk around the streets and not in the streets and not be there with the people. I reinvest I own land I support the people and I make moves wherever I am. I can remember listening to this weekly radio station while I was locked up and they would play just underground shit. I thought that I had the ability to do better. So I used to write rhymes and more rhymes, shit I aint done since I was a little kid. I found a way to express thoughts and frustrations about my situation and shit my people were going through in that. I guess it takes you being a slave to understand what freedom really is.

Obviously hip hop is a vessel for giving everyone and anyone a voice, how powerful do you think it can be against the power bloc?

It’ll be as powerful as we are willing to sacrifice to make it.

Do you think it’s a shame that you get these rappers on MTV boasting about how they’ve been shot, or how much jewellery they have, when the people who are struggling and need a voice, don’t have as much exposure as these bling-era rappers?

I don’t give a fuck what other niggaz do, I’m not eating with them so really I don’t focus on it too much. I’m not here to knock anyone’s hustle, not everyone gives a fuck about the culture they are just trying to feed their family. As long as they just stay the fuck outta my way, we cool.

Do you aim your tracks at any group of people in particular as a fanbase? Or are you just putting your message out there and want anyone to grab hold of it?

I make music for whoever listens to it.

You have a new single out, Bin Laden, with Mos Def, with Chuck D and KRS-1 on the remix, can you tell us a bit about the track? And did you particularly want the likes of Chuck and KRS on a track with you because of their political background in hip hop?

They have been long time supporters of the music I made they both heard the album I had “Revolutionary Vol.2” and when KRS reached out to me about doing some shows I was there. When I reached out to him about the hook he was right there. Chuck D is someone who supported me before he ever knew me so I respect them both very much and I’m glad to be able to work with them. Same thing with MosDef we run in very different circles, he’ getting that Hollywood money but he did this joint with Green Lantern and Green Lantern put me on it for the verses. When he heard it he showed it love, I appreciate any support I get from people that are veterans in this game. Niggaz like me need that. Really Bin Laden and the Remix were more of a buzz single to keep people at bay until more exclusive material is ready and the official lead single for ‘The Middle Passage’ is ready. But it’s a song that I am very glad I made and that I put out there.

Are there any artists you are into particularly at the moment?

I just finished executive producing an album by this artist from NYC called “AKIR” his album is title is Legacy and that shit is crazy. It’s his creative vision but I helped him with it. It talks about the self righteous aspect of Revolutionaries, how they fuck themselves over with that racist shit against whites, against other blacks, against themselves, brown and Asian. It talks about the street hustle of making it on your own. We came up in very similar ways but I came straight out of jail into battling while Akir was more of a producer and a hustler before he realized he had a talent for this.

How disappointed were you that Bush got back in for a second term? A first time is bad enough, but surely you’d think people would have learnt the lesson after his first term?

I knew he would win again because nobody ever went broke underestimating the ignorance of the American public. And since America is the bastard child of the British Empire its destiny lies in overextension and internal chaos as did Britain’s. But believe me the empire will find a new form just as the Romans did when their empire collapses, they could not conquer with the sword so they hid their paganism and their ideology of world domination inside the voice of a man that they themselves crucified. Much like America claims to honor Martin Luther King Jr. and his message but it was America who killed him.

It was Dick Cheney, the Vice President and Trent Lott, Former Majority leader of the Senate, who were some of the few people who voted against making his birthday a national holiday. After Bush there will be another conservative fuck who gets elected, people are willing to accept slavery to feel even a little bit more secure about their money especially since it’s painfully obvious that America is fighting a losing industrial war with China and India. Shit is real out here and when America goes hungry the streets starve first. So I’m making moves.

Finally, do you have any messages to the readers of Caught In The Crossfire?

Try having an original idea. Don’t believe the right or the left, (labor or conservative) they both want your money, don’t even believe me. Read all sides of things and make up your own mind it is the only way to confront an issue.

Thanks for your time, peace to you and keep on fighting!

Much Respect for having me here. Peace.
Immortal Technique

Check out all of Tech’s info on www.viperrecords.com.