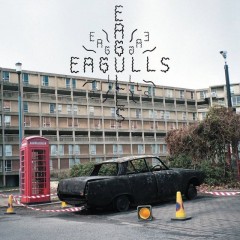 For all intents and purposes, Leeds’ Eagulls are a hardcore band playing post-punk. Where many bands loosely lumped into the genre opt for po-faced melodrama, Eagulls inject a snotty snarl into each track on their self-titled debut.

Opener ‘Nerve Endings’ is a statement of intent, driven by pulsating drums and vocalists George Mitchell’s desperate wail. Despite his vocal approach sitting somewhere between speaking, singing and shouting, there’s a weirdly discordant melody which makes the track all the more alluring. Often employing repetition throughout the album, he manages to create tracks that are as aggressive as they are catchy – see the verses of ‘Nerve Endings’ as a perfect example.

Like many bands who take a influence from the 80s, there’s a big emphasis on the bass tones, however the lighter guitar work laid over the top ensures that there’s never one component which rises above the rest of the noise, giving each Eagulls track a sound that is their own. The album consistently balances brash aggression with pure pop melody – if you pull the tracks apart, they’re genuinely noisy and weird, but always palatable. ‘Possessed’ is the perfect example of this – if this track was stripped of some of its jagged discordance and given to a less adventurous indie-rock band, it could easily be a festival sing along track. Thankfully, Eagulls clearly don’t care much for arenas and their uncompromising approach makes the album of the most truly exciting debut records of 2014.

Throughout the record, there isn’t a huge palate of different shades but this doesn’t make it any less remarkable. This is the sound of a band marking their territory and delivering a unique album that keeps its varied influences at arm’s length. This is post-punk with its sights set squarely on the future.