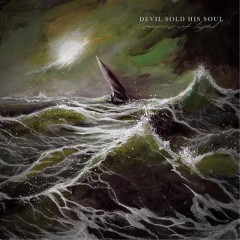 Imagine the moody and dark cinematic visuals of the brutal film ‘300’ crossed with a progressive post-hardcore band who like to spice things up with a bit of metal, and the result is ‘Empire Of Light’ by Devil Sold His Soul.

If you’re familiar with the band then you’ll already be prepared for what a gem this album is, if you’re new to DSHS then you’re in for a treat. ‘Empire of Light’ is the third full-length from the British band, and what an outstanding record it is…

From opening track ‘No Remorse No Regrets’ you get pulled into an album that manages to swagger between ear-bleedingly-brutal screams to soaring crescendos that almost lift you off the ground. With this album you are getting something very special. ‘Empire of Light’ is crafted beautifully. It swings from sublimely light harmonies to riffs and screams that will melt the flesh off your face.

In all honesty the tracks all feed into each other, so it’s very hard to pick out a single song with preference to another. Instead, the whole album plays as an EPIC sonic journey. If you had to throw in a few band comparisons, maybe early Architects, early We Are The Ocean and a bit of Devil Wears Prada crossed with something entirely different such as Rinoa.

If you love metal, post-hardcore or prog… wait scratch that… If you like any music at all that’s a bit ‘heavy’, then go buy this album straight away. We can guarantee you won’t regret spending the money, what you’ll get to listen to is an album from a band who have just begun to reach their enormous potential.