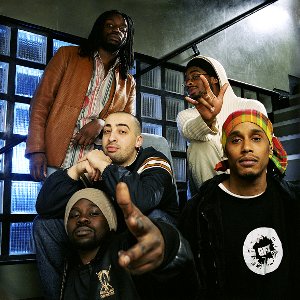 When you think of French music, who comes to mind? Johnny Halliday? Edith Piaf? Probably Serge Gainsbourg? But it’s the hip hop scene which has been the most important cultural revolution in the country of the Bastille, giving as it does a voice to the disenfranchised youth and allowing second and third generation immigrants the chance to share their story.

Throughout the 90s in particular and moving through into the 21st century, French MCs, DJs and producers flourished, becoming part of the country’s fabric and providing the backdrop for other mediums, such as Matieu Kassovitz’s masterpiece ‘La Haine’. The Exception Culturelle Francaise law, which stated that at least 40% of the music played on the radio must be homegrown certainly helped, but it was the hard hitting and often overtly political and anti-establishment lyrics which cemented these artists in the foreground of people’s attentions.

It’s not easy to dissect every group or artist that made an impact in their homeland, but the five acts below are a selection of those that made their mark, whether in the old school or in the recent past. Look, listen and love. Vive La France!

Saian Supa Crew are simply one of the most innovative hip hop groups on the planet and certainly the foremost in France at pushing the musical envelope. Each track from their albums ‘KLR’, ‘X Raisons’ and ‘Hold Up’ features fast-paced delivery from each of the MCs across sometimes skittering, sometimes booming beats across their releases showcasing the talents of both the rappers and producers.

Even when a couple of the MCs fell away from the group, the Saian juggernaut showed no signs of abating and even caught the ears of RZA and Will.I.Am, proving how far their reach had travelled. With double-time rapping, reggae influences, singing and beatboxing, there’s no let-up on any of their albums, or the groups they were in pre-Saian – Explicit Samourai, Simple Spirit and OFX – which is why they are such an important group to get into.

Mid-90s hip hop in France was very much influenced  by the gangster rap sounds of the American rap scene and it needed a group to stamp their own Gallic footprint into the scene, which is exactly what IAM did. Still lauded now as an extremely important group in the evolution of the country’s rap scene, IAM’s seminal album ‘L’Ecole De Micro D’Argent’ is as fresh today as it was when it was released in 1997.

Having caught the ear of Wu Tang and featured affiliated rappers on their track ‘Petit Frere’, they saw their album go gold in just two days and gained momentum outside of their homeland with a set at Reading Festival. Solo projects became commonplace amongst their members, but it’s as a group that IAM really showcase how hard-hitting and head-nodding French hip hop can be.

Solaar is the daddy of French hip hop, still releasing records to much acclaim in both his homeland and abroad. Whilst purists prefer his older work, it’s his later material which brought him the mainstream plaudits with tracks such as ‘La Belle Et Le Badboy’ and ‘Solaar Pleure’.

Having guested on Missy Elliott’s ‘All In My Grill’ and seen his tracks used in such high-profile TV shows as Sex And The City, Solaar’s star continues to shine as brightly as ever. His reminiscence of his childhood and African heritage couple beautifully with his poetic lyrics throughout his entire catalogue and it’s clear to see why Solaar is viewed by many as the benchmark for hip hop in the country.

Orelsan courted much controversy when he first hit the French scene, with members of the French Parliament unfairly accusing him of sexism and masochism. Lyrically, he can border the edges but does so in such a skilled way, that you can’t help but appreciate his talent.

His album, ‘Perdu D’Avance’, dropped in 2009 and showcased his wit, wordplay and flow amongst a backdrop of fun beats which lead to him being dubbed the “French Eminem”. Regardless of whether that’s the case or not, it’s going to be interesting to see where the new face of French rap is going when he releases his follow-up.

Getting noticed by the legendary Joey Starr of the infamous Supreme NTM crew at an early age, Disiz La Peste thrust himself into the limelight with ‘La Poisson Rouge’ in 2000 with lead single ‘J’Pete Les Plombs’, inspired by the film ‘Falling Down’. Not one to rest on his laurels, Disiz continued his climb to the top of the French rap charts and appeared on the soundtrack of ‘Taxi 2’.

2009 saw Disiz retire from rap with a bulletin on MySpace but he said he was looking to continue on with music in general. With this statement came ‘Disiz The End’, an album that showed he’d lost nothing in the nine years since his debut album with the standout ‘C’est La Verite’ becoming France’s own version of Lil Wayne’s ‘A Milli’. Whether dropping double time as in his verse on Rouge A Levre’s ‘Gash’ or more centred rhyme patters on ‘Il Est Deja Trop Tard’, Disiz is definitely one for the annals.